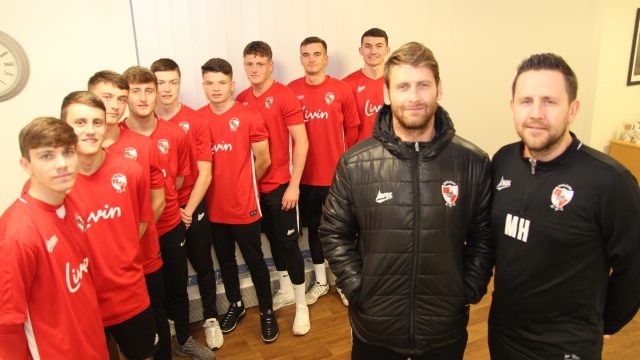 SHILDON AFC have committed to offering young players with emerging talent the opportunity to play in the Ebac Northern League in their first team.

David Dent, chairman of Shildon AFC set out plans to grow the club into the wider community in October 2018 with the appointment of a new sporting director Martin Gray.

Dent said “with the new structure of the club in place Martin is now in a position to identify any young players who have reached a point in their football career where they would benefit from, and be put forward to play with the first team”

There are ten eager young players currently associated with the first team. Aaron Duell, Dominic Curl, Aidan Heywood, Brad Hird and Dane Eltringham who are all under 21 years old and Ben Reay, Stevie Johnson, Mason Hurworth, Oscar Eckley-Aldsworth and Liam Waters who are 16 years old.  The four youngest players have all come through a training programme with the Martin Gray Football Academy.

Daniel Moore, Shildon AFC manager, took the decision to play Mason Hurworth and Stevie Johnson at the Durham Challenge Cup quarter final which they won with an impressive 6-1 victory against Consett AFC.

Moore said : “Both myself and assistant manager Mark Hudson  have worked hard with these young lads in all aspects of the game.  The aim is to give them a platform to work hard, thrive and achieve their goals. I want to add to the professionalism of the current senior members of the squad such as Matty Robson and Dale Mulligan.  They have been brilliant when working with the young players and being able to be around such characters will only develop them even more”