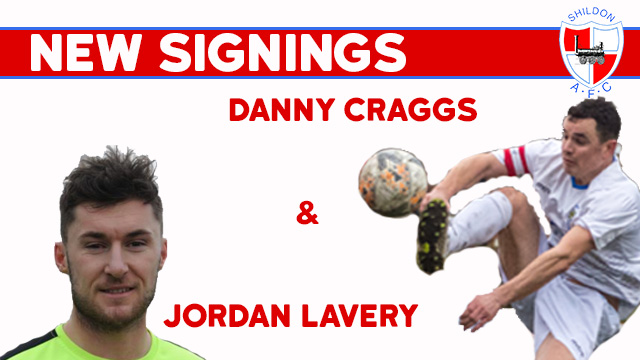 We are delighted to announce that Danny Craggs & Jordan Lavery have both signed for the club for the 2019/20 Season.

Jordan is a strong tackling left sided player and a good passer of the ball, previously with Sunderland RCA & Consett

Shildon AFC Manager speaking to the website said “The signings of Danny and Jordan will add experience and guile to a relatively young squad that finished the season well.

Danny is a player that I’ve played with and against and always admired his quality, attitude and professionalism, his desire to win trophies and the want for a new challenge is a great match with the club.

Jordan is a hungry lad with great quality and is one of the best left sided defenders in the league who wants to challenge himself and play as high as possible which is why he has taken on the task to help get the club promoted. “

Welcome to the Club Jordan & Danny