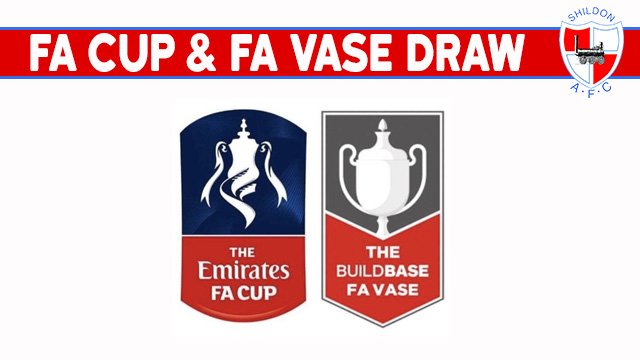 SHILDON AT HOME IN FA CUP AND FA VASE

Shildon Football Club have been drawn at home in both their opening FA Cup competitions this season.

In the FA Cup, the Railwaymen will face an old foe in Garforth Town AFC, who they met previously at the same Extra Preliminary Round stage of the competition in the 2013/14 season.

On that occasion, away from home, Shildon comfortably progressed to the next stage, winning 4-1 with goals from Ben Wood, Sam Hodgson, Jamie Harwood and Darren Richardson.

If they progress on this occasion, they will host another familiar name in Colne FC, who they last met in 2014/15 in the FA Vase, also away from home and also progressed, winning that tie 3-2 after extra time having come from behind twice in the game. A Ben Wood double and a Paul Connor goal sealed the win in a hugely entertaining game.

Meanwhile, the Railwaymen will face near neighbours, Tow Law Town in the FA Vase with the winners drawn away to the victors in the match between Easington and Holker.

The last competitive game between the Railwaymen and the Lawyers took place in the 2014/15 League Cup when Shildon ran out 0-4 winners. Manager Daniel Moore was the man of the match that day, scoring twice with Ben Wood and Adam Rundle also on the scoresheet.

The FA Cup tie between Shildon and Garforth, kicking off at 3pm, will take place at Dean Street on Saturday 10th August with the winners receiving prize money of £2,250.

The FA Vase First Qualifying Round tie against Tow Law, also at 3pm at Dean Street, will take place on Saturday 31st August. The winners receive prize money of £550.