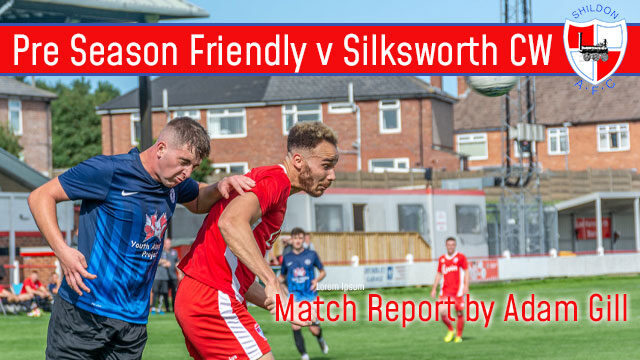 Please welcome Adam Gill to the club who will be helping with the media output from the football club.

Shildon put five past Silksworth CW at Dean Street as they maintained their 100 percent pre-season record.

The home side almost took the lead in the third minute when Billy Greulich-Smith ran onto Zak Atkinson’s through ball, before taking it round Silksworth keeper Joe Clayton, however his effort was blocked on the line.

Josh Winthrop nearly gave the visitors the lead 34 minutes in, however his effort from the edge of the box came back off the post.

Atkinson found Greulich-Smith in behind just before half-time, leaving him to round Clayton and slot home.

The hosts doubled their lead on the hour mark, when Clayton misjudged a cross, leaving Michael Sweet to tap home into an empty net.

Substitute Daniel Moore increased his sides advantage when his 40 yard strike found its way beyond Clayton.

Shildon scored their fourth of the game 15 minutes from time, when Dean Thexton ran onto a loose ball before slotting home.

Silksworth went close to pulling a goal back when Andy Baxter cut inside before sending his effort just over the bar.

The home side capped off their victory late on, when Sweet’s cross found the head of Moore, who guided his header into the top corner.