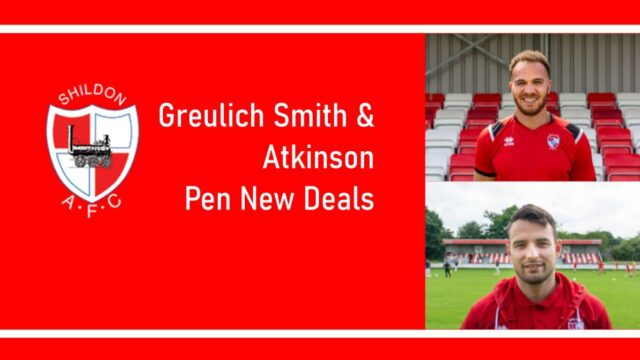 Shildon AFC are delighted to announce contract extensions for both Billy Greulich Smith and David Atkinson.

Billy has signed an extended contract which will take him up till the end of the 2022/23 season with a 1 year option (subject to FA approval).  Billy signed for Shildon on the 19th January 2012 and has made 337 appearances for the club scoring 167 goals.  This means Billy will have served over 10 years with the Club and a testimonial is planned during the 2022/23 pre-season to celebrate his time at the Club.  Further details will be announced in due course.

David, signed for the 2021/22 season has agreed to an extension to his contract with the Club which takes him till the end of the 2022/23 season with a 1 year option (subject to FA approval).  David has made 30 appearances to date scoring 2 goals.

Both are key players for the Club moving forward and we are delighted that they have signed new deals.