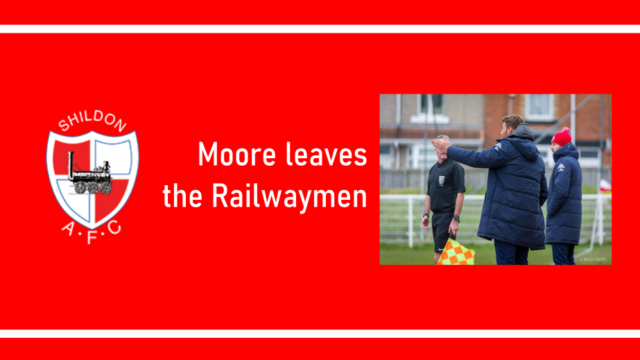 The club have held extensive talks with Daniel in recent weeks and a mutual decision was taken not to extend his current contract at Dean Street.

‘Bobby’ has amassed almost 500 appearances over two spells with the Railwaymen and has enjoyed success as both a player and a manager.

After moving into the dugout in January 2017, Daniel has led the club to three top six finishes in the Northern League and played a significant role in our first ever promotion into the Northern Premier League.

A historic first season in step four of the non-league pyramid has been a success with the club securing a play-off place and producing some moments that will live long in the memory.

Silverware also arrived in the form of the Cleator Cup, and of course, the memorable 1-0 win against South Shields in the final of the Durham Challenge Cup.

However, after a series of meetings in the last fortnight, a decision has been taken by both parties to bring an end to his time with the club as Daniel feels that a move will allow him to progress on to the next step in his managerial career. His Assistant, Mark Hudson also leaves the Club.

Club chairman David Dent said: “I will never forget how Dan stepped into the job in extremely difficult circumstances.  We have both grown together over the years and with the backing of the Club, he has taken Shildon AFC to a level that we have never played at before where we have surprised a few people in the NPL getting into the play-offs in our first season.  Mark, as well has also played a big part in our success.  It has become evident that Dan needs to move on, which he believes is best for him and it’s also best for the Club. This is the end of an era and we now look forward to starting a new chapter as we look to build upon our great start within the NPL.”

Further announcements will be made in due course.

Everyone connected with Shildon AFC wishes Daniel and Mark the best of luck in their next venture.