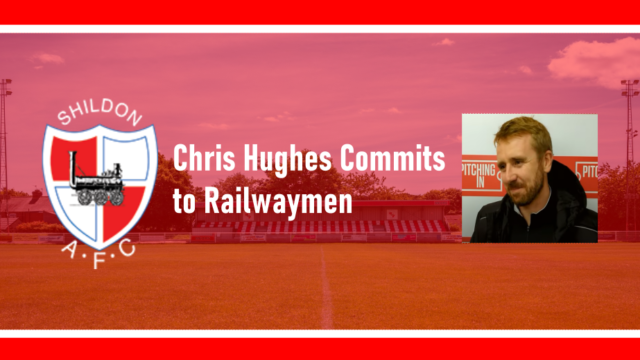 Shildon AFC is pleased to announce that Chris Hughes has committed to the Club until the end of season 2024/25 as First Team Manager.  Chris will be supported by Craig Hughes, David Pounder, Alex White and David Howe who all form part of his Management Team.

Chairman David Dent said “I’m delighted that Chris has committed to the Club.  He’s made a difference already in the way we train and play and he’s started to get results, it’s really important to have continuity but it’s even more important to have someone who shares your football philosophy and who you can trust.  I’ve known Chris for over 10 years, he shares the same values as the Club and I’ve every confidence that with his commitment and ability he will ensure that we are playing in the NPL next season, which is an integral part of our vision for the Club.”

Chris Hughes said “We are delighted to commit to the club and the long term plan the club has in place.  We have made changes to the way we train, play and analyse games over the past few weeks.  The way the players have responded to the changes has been pleasing and we know there is even more to come from them.  We have seen a more consistent, higher level of performance in the last 4 games and will continue to raise the standards as the weeks go on.  Our positive relationship with the board, reserve team, U18s and supporters will be key in making this vision a reality and we are committed to the wider vision the club has.”