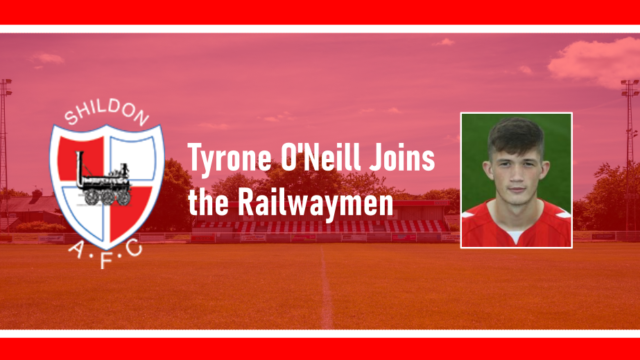 Tyrone O’Neill signs for the Railwaymen

Shildon AFC is delighted to announce the signing of striker Tyrone O’Neill from Stockton Town FC on a two year contract (subject to FA/League approval).

Tyrone started his career with Middlesbrough’s Academy, signing professional terms in 2018, he then spent time on loan at national league clubs Hartlepool United and Darlington.  At the start of the 2021/22 season he signed for Scunthorpe United making 4 appearances before returning to Darlington on loan.  Tyrone then joined Stockton Town in August 2022.

Shildon AFC Manager Chris Hughes said:  “We are delighted to bring Tyrone to the club.  He is someone I have known from working at Middlesbrough Academy and have always followed his career.  He is hungry and wants to do well. Tyrone will help us as a team but it is important to recognise that the team will also be able to help him achieve his goals too”.

Shildon AFC would like to thank Stockton Town FC for their help in this matter.