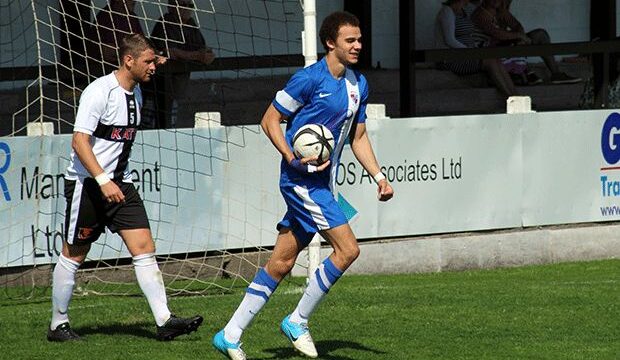 .
Sadly on a bank holiday Monday at the Brewery Field it was only the weather that was glorious for Shildon, after being defeated 4-2 by Vase holders Spennymoor.

Shildon, attacking up the slope  first, lacked any real bite in the first forty-five minutes. Perhaps it was the heat, the early kick off (1pm) or the second game in two days for the depleted squad, but they certainly struggled to spark.

The hosts were not much better, but they were the ones that found themselves two-nil up at the break.  Having loud claims for a penalty waved away in the first five minutes, when the goalkeeper Lewis got fingertips to the ball before the onrushing Cogdon, it wasn’t long before the referee would point the spot.

Brackstone brought down Dodds in the six yard box as a cross was coming in. You had to feel for Lewis in the Shildon goal as not only did he expertly save the penalty but two rebounds as well – only to be beaten at the fourth attempt.

Spenny’s second came from 25 yards out on the right wing when Dodds put the ball in the top corner of the net. Whether or not it was a shot or cross is up for debate. The fact that he had too much time and space to do it, isn’t. The half fizzled out after that with Shildon’s only real threat being Scroggins who saw a couple of speculative long rangers go well wide.

Whatever Shildon had at half-time it was more than the majority of the crowd, who were left complaining about the lack of the usual Burger van (a mix-up with kick-off time apparently).

Nevertheless, whatever Gary Forrest had said to his men it obviously worked, as within ten seconds of the kick off, Billy Greulich-Smith got on the end of a couple of clever passes to run clear and score with a clever lob.

It was just what Shildon and the game needed and five minutes later the visitors were level with Ben Wood latched on to a great ball down the right channel to keep calm and fire across the ‘keeper and in off the post.

Shildon, first to everything, were a different side, and Spenny looked rattled.

The large away contingent were really getting behind their team, but the game changed in the 55th minute. Scroggins, who had been at the heart of the resurgence, went clear through and should have put the Railwaymen ahead, but failed to hit the target, or indeed the tin shed behind the goal.

This seemed to wake Moors and give them time to compose themselves. And sure enough, eight minutes later, a clever run and cross by Dodds on the right set up a tap in for Cogdon.

Shildon did not give up and battled hard, but when the ref failed to give a free kick that left a man down in the Spenny half, they saw an opportunity to go on the counter and wrap the game up in the 76th minute.

Shildon will be left kicking themselves. If the second half efforts had been matched in the first they may well have got something from the home of the favourites for the title. They will have to wait until the reverse fixture on Boxing Day to have another pop, when the weather may be a little different.