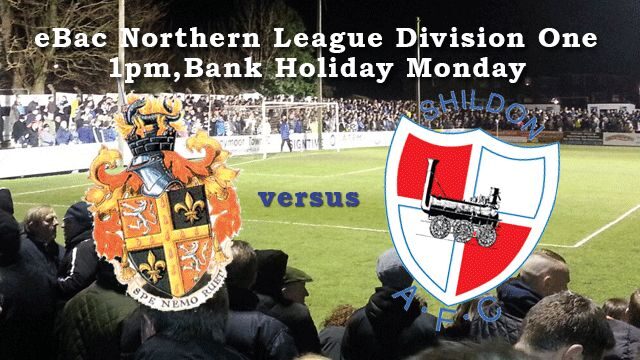 The Railwaymen make the short trip to The Brewery Field this afternoon to face local rivals and FA Vase holders, Spennymoor Town for their second big derby match in three days.

The Bank Holiday weekend builds to a crescendo as Shildon take part in the headline fixture in the Northern League for the second match in a row, and they will be hoping to return home with a result in the bag after a depleted squad were unfortunate not to take all three points against West Auckland Town on Saturday.

Shildon will be boosted by the return of several first team picks after the squad was ravaged for Saturday’s match and will take confidence from the fact that the threadbare side so severely tested one of their main rivals for honours this season. Shildon expect to have Ben Christensen, Carl Jones, Lee Scroggins and Paul Buzzeo available for selection.

The side will be fully aware of Spennymoor’s slow start to the season and will be wary that the recent three-time league champions will be looking to use this fixture to kick-start their own campaign.

The match, which is one of the showcase games of the Northern League calendar, is expected to pull a sizeable audience. The tie will kick off at 1pm. Admittance is £6 for adults and £3 concessions.