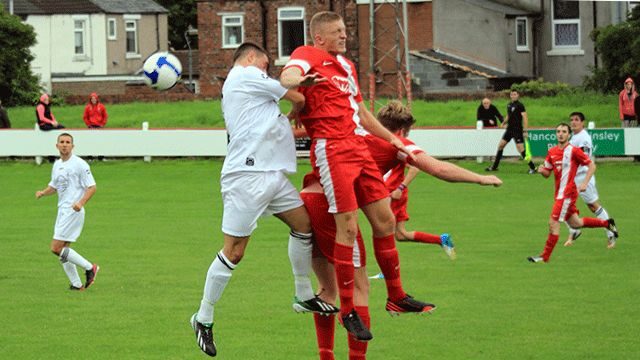 Mirroring last season, an injury crisis meant that the coach and assistant were forced to register as players in midweek to give this match any chance of taking place. Indeed, as late as lunchtime, there remained uncertainty about whether the match would go ahead with Shildon unsure if they could muster the required number of players.

Eventually a full starting compliment showed up, but Niven’s service were required in the second half, when he replaced debutant Adam Garrity after the new signing was thrown in at the deep end, having put pen to paper just hours earlier.

In the end, the makeshift side were unfortunate not to take all three points, having created several clear-cut chances while the back four shut out the visiting attack, Lewis Graham remaining untested virtually throughout.

The Railwaymen could have got off to a flier, but Billy Greulich-Smith, in only his second start, demonstrated his rustiness by missing the target from close range. Shortly afterwards Darren Richarsdon could also have given the home side the lead but squandered the effort.

Having survived the opening attack, the visitors responded with their own counter, putting the Railwaymen under the cosh for a sustained period, although they failed to test Graham in the Shildon goal. In fact, the closest effort in the remainder of the first half fell to the hosts when Billy Greulich-Smith narrowly failed to reach a driven cross by Garrity.

One would be forgiven for mistaking which was the weakened side in the second half as Shildon took control of the game while comfortably dealing with most of what West could throw at them.

However, a succession of Shildon chances went begging as first, Darren Richardson couldn’t redirect a Ben Wood cross onto the target and Wood’s backward header from a free kick also missed the target.

Then came two strong claims for a penalty, although most of the pleas, waved away by the referee, were from the stands.

Undoubtedly the best chance of the game fell to Greulich-Smith in the 68th minute but he inexplicably failed to convert Ben Wood’s cross in front of an open goal from three yards. The striker, a fan’s favourite who otherwise had an excellent game, put the missed opportunity down to rustiness. Although one would have been hard pressed to realise he lacked fitness as, in trademark fashion, he chased every loose ball.

Perhaps West’s best opportunity came in the 80th minute when a right wing cross was headed back across the box to Luke Carr, who blazed over from 12 yards.

Shildon were able to create one other goalscoring opportunity late in the game. Greulich-Smith chased and won one of those lost causes before finding his fellow striker, Wood, who sidestepped his marker and fired a fierce goalbound effort that West keeper Neal Atkinson tipped onto the post.

West spent the final moments pressing against the Shildon defence but were unable to create any clear cut chances. It would have been rough justice had they stolen the match but in the end, Shildon, who began the match fearing it may need to be abandoned, proved they have strength in depth. And while they will be satisfied to have survived the pre-match crisis, they will feel unfortunate not to have collected maximum points.