Man of the match – Xander Caygill

The U7’s experienced their first league defeat in a bravely fought game.  Xander Caygill scored a goal in the 5th minute.   Shildon pushed on and there were numerous chances that went begging.

Shildon U8’s played away to Norton and Stockton Ancients.  Both teams were very evenly matched from the outset with some good football being played.  Norton had an early shot at goal but hit the crossbar and Shildon also had some good attempts, saved by the oppositions keeper. The score was nil nil as the 1st half ended.

Norton scored the only goal of the game very early in the second half.  Shildon picked up the pace after this but nothing seemed to go their way. The Shildon forwards created some good chances but unfortunately they just couldn’t score.  The Shildon defence worked hard to stop Norton getting any more goals and the game ended 1 nil to Norton. 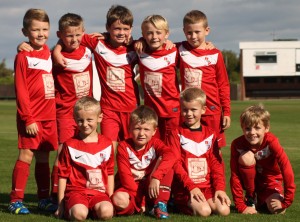 As normal Shildon seemed to grow in confidence as the friendly game got underway.  The lads played some great football and Jack Leighton scored early in the game.  Jack Milner scored Shildon’s second goal with an excellent corner kick.  Norton picked up the pace and scored 3 goals past Shildon and went on to win the game 3 – 2.  Jack Milner was awarded man of the match.

The newly formed U9’s continued their development on Sunday at home to a well organised Darlington TSC.  In the first half Shildon were slightly off the pace and went behind from a good move by Darlington.  Jamie Donohue pulled several good saves to keep Shildon in the game. Shildon fought hard and were unlucky to go 2 behind before the break.  Shildon came out for the second half ready and started taking the game to Darlington.  They were the better team for long periods and got there rewards through a goal from Anthony Jary who doubled his tally five minutes later from a  good passing move by the whole team.  Shildon could have snatched victory several times but the Darlington goal was having a charmed life.  The  game ended honours even and well deserved . You can see the improvement week on week from
this team who are gaining in confidence all the time.

A bright start from Shildon with Jacob Race having early chances to put Shildon in front, but Darlington’s keeper made some great saves. Darlington came back into the game after a slow start but were unable to break down a solid Shildon defence, with some great tackles from Ben Hopper.  The first goal of the game came from Darlington, a good cross from the right was turned in at the back post leaving Owen Burke Shildon’s keeper with no chance.  More pressure followed from Shildon but Darlington’s keeper continued to impress.

A great start to the second half for Shildon, great work by Kane to skip past 2 defenders and his shot was saved only to fall to Jacob who produced a calm finish.   Shildon continued to push with Kane at the centre of the of the moves, shortly after his 1st goal Jacob added a 2nd with a great half volley from just inside the box.   Against the run of play Darlington scored with a long range shot.  Shildon hit straight back again with great work by Kane down right which James Rusby finished at the back post.  Darlington’s 3rd was a powerful shot with a good attempt to save from Owen.

A good all round team effort.

A difficult start to the season away to one of the fancied teams, as well as missing a few of the team’s influential players, was made even harder by a disappointing refereeing performance (the senior team don’t have a monopoly on disappointing refs :().

The team went in to the half time break 8-0 down, with Gary working overtime to pick the lads up.  To their credit, they came out and had a good go at it.  A number of chances came the teams way, with Ben Oliver just sliding one past the post and Jack Mortimer bringing a good save out of the keeper.  Jack got his reward for his endeavours, latching on to a through ball to slip it past the goalkeeper, despite the despairing efforts of the full back.  Shildon’s second goal came after a Mortimer free kick on the edge of the box was parried by the goalkeeper, and Blake Milner managed to squeeze the ball into the net from the byline.

A great deal of credit must go to the whole team who conceded 14 goals overall, 5 down to the ref not playing the offside rule, and 1 bundled in with a hand, yet they kept going right till the final whistle.