Man of the Match – Sam Hopper

A clean sheet was achieved by great saves from Christian Robinson [first half] and Amelia Clarkson [second half] goalkeepers.

Man of the Match – Cole Layfield

Shildon travelled to Hartlepool to play Stranton FC.  From the kick off Shildon moved the ball well, some of the passing and interplay was nothing short of brilliant with Cole Layfield receiving the Mom award.   Each player was committed to every challenge and fought hard.

The second match, a friendly, was a competitive high scoring game in which Shildon carried on where they left off.  Shildon welcomed Harrison to the team who strengthened the midfield well and showed his capabilities. Goals were plentiful with Anth Jary (3) Cole Layfield (2) Michael Gaffney (2) and James Douthwaite (1).

Throughout both games, the rest of the team of Ashley Jardine, Jamie Donohue ( goalkeeper) Caitlyn Lawton and Kai Chadwick  stood firm and thwarted many of Stranton’s attacks and did their individual jobs well.
The Mom award for the second game went to the whole team such was the high standard performance they put in from start to finish never letting the opposition off the hook.  Well played all.

Man of the Match – Jacob Race

Shildon have progressed to the semi -final of the league cup after an outstanding win against stiff opposition.  Kicking off against the wind Shildon fell behind after 3 mins from a wind assisted long range strike.  Refusing to drop their heads Shildon fought hard and with 2 mins left of the 1st half they equalised with a fine strike by Kane Hopwood.

At the start of the 2nd half Shildon began to get the upper hand with all the team performing to a high standard, and with 2mins left and extra time looming a neat one two saw Kane slot in the winning goal.

Man of the match – Noah McCourt

Shildon gained revenge for the previous week’s defeat when the entertained Brompton at the Scout Field.  From the first whistle Shildon were on the front foot, and took the lead within 7 minutes.  Noah McCourt latched on to a through ball and calmly slotted it away.  The lead was doubled on 10 minutes with Jack Mortimer shooting just inside the right hand post.  Mortimer made it 3-0 on 17 minutes with a close finish from a corner.  A minute later, Adam Campbell made it 4 with a simple tap in.  On 20 minutes, Mortimer completed his hat trick with the goal of the game.  Taking the ball down 25 yds from goal, he let fly with a shot that the keeper had no chance with.  With no more goals in the first half, the team went in 5-0 up.

Into the second half, Brompton had the advantage of the wind on their backs, and within a few minutes had reduced the arrears with 2 goals.  Shildon settled down to play again, and regained the initiative with goals on 39 minutes from Mortimer, and on 43 minutes from the industrious Ben Oliver.  Another goal from Brompton was soon followed on 49 minutes from Shildon’s Noah McCourt.  Shildon then made a number of changes to give the squad a run out, and had further opportunities to extend the lead, but couldn’t quite find the back of the net.  Brompton managed to score 2 more consolation goals in the closing minutes, but Shildon ran out worthy winners 8-5.

A superb performance by an ever improving squad. 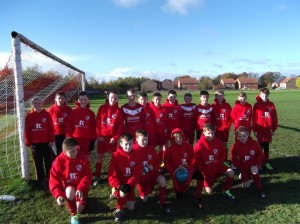