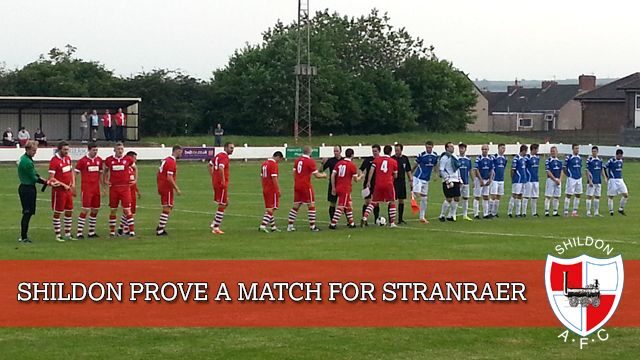 Shildon unveiled their new home kit against Stranraer on Friday night in their third pre-season friendly of the new campaign.  It was also their first match of the new season back at Dean Street and although they fell to a single goal two minutes from time, the Railwaymen can be hugely satisfied at matching the Scottish League One side for almost the entire game.

Indeed, the better chances were created by Shildon before the visitors took the lead. Lewis Graham produced an excellent save, stopping a driven shot low to his left side in the early moments of the game before ‘Bobby’ Moore poleaxed a Stranraer defender with a rocket from 25 yards.

After an even first half, Paul Connor could have opened the scoring at the beginning of the second, holding off a number of defenders superbly before skewing his show narrowly wide of the far post from a tight angle.

It was a game of few real chances as both sides cancelled each other out in a competitive midfield battle with the deadlock not being broken until two minutes from time. A well worked move set the Stranraer manager’s brother, Chris Aitken away and he made no mistake, stroking the ball past the onrushing Lewis Graham from the edge of the box.

As Shildon pressed forward in search of a last gasp equaliser, it was instead Lewis Graham who produced another wonder save at the other end as the visitors broke away to prevent an even more unfair scoreline.

Stranraer manager, Stephen Aitken was very complimentary of the Railwaymen’s performance, acknowledging that the side had improved and strengthened since the two met each other during last pre-season.

And certainly the lads can take plenty of confidence from their performances so far in pre-season and will not have had that dented last night, even if a draw would have been a fairer result.