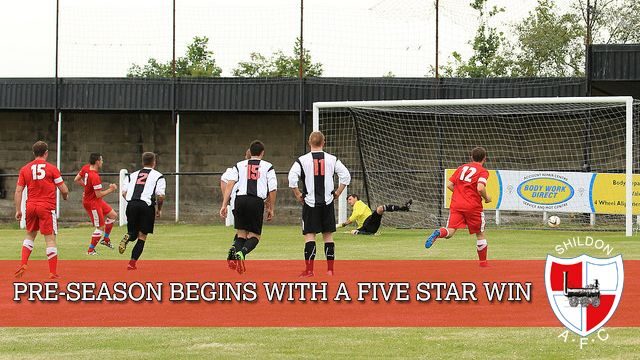 The close season officially ended today for the Railwaymen and their hosts, Tow Law Town, and for Shildon the new season began with a five star display at the Ironworks.

Shildon dominated possession and took a two goal first half lead before some lax defending allowed the Lawyers back into the game with two cheap replies.

But the Railwaymen got back on track and scored three more without reply to open their 2014-15 season with a thoroughly deserved 5-2 win.

Two of Shildon’s four close season signings made debut starts, with the returning Daniel ‘Bobby’ Moore in centre midfield and Adam Rundle on the left wing both performing well.

The Durham Challenge Cup winners were on the front foot from the kick off but it took until the 25th minute for Billy Greulich-Smith – the county cup goal hero – to open the scoring with a simple tap in after good work down the right side.

In the 40th minute the lead was doubled when Paul Connor, who looked dangerous throughout the first half, cut inside on the right before curling a left-footed shot past the keeper’s right hand and into the far corner of the net.

But what looked like a straightforward victory was complicated by slack defending either side of the first half.

Just before the break a simple through ball put Scott Thomson clear, and with the defence static, the midfielder has the simplest of tasks to lob the ball over the onrushing Lewis Graham in the Shildon goal.

And just after the break, confusion in the Shildon defence was followed by confusion over the outcome of Simon Ord’s cross-cum-chip, which fortuitously sailed over Lewis Graham and into the far corner of the net. At first it appeared to have been ruled out for a foul, but the referee then seemed to change his mind and award the equalising goal after all.

The goal came as Shildon’s second half substitutes were still finding their feet, but Shildon took the lead again after Sam Garvie had his taken from under him by Tow Law’s keeper. Mark Hudson stepped up to coolly slot home the resultant penalty, sending the keeper the wrong way (pictured above).

It was then the turn of Michael Rae to score his first Shildon goal on his second half debut. Shildon’s forwards pressed the Tow Law defence into losing the ball before sending Rae through to slide the ball easily past the keeper for Shildon’s fourth.

Shildon were playing some scintillating passing football on this hot Saturday afternoon and had two goals ruled out for narrow offside decisions. Both deserved reward for the excellent build-up play that preceded them.

But there was time yet for the Railwaymen to add a fifth goal. Another excellent move down the right culminated in a 16 yard drive by Sam Hodgson which nestled in the corner of the net and saw Shildon off to a comfortable start to their pre-season.

Next up will be a sterner test at Blyth Spartans on Tuesday evening before the side’s first home friendly next Friday – a rematch from last season as Scottish League One side Stranraer visit Dean Street.

See photos from today’s match by Tom Clegg on Flickr.