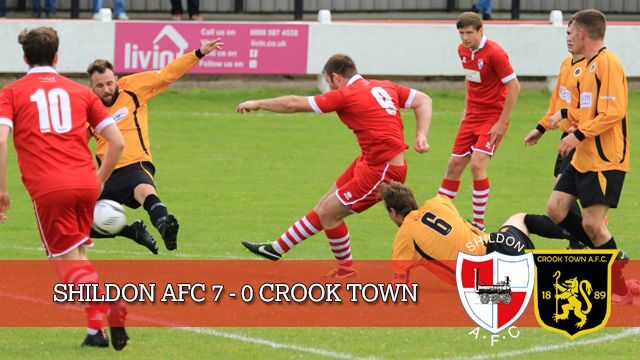 Seven up Shildon march on in FA Cup

Shildon ensured their progression in the FA Cup with a seven goal thrashing of local rivals Crook Town on Saturday.

A hat trick from man of the match Micky Rae (pictured scoring his first and Shildon’s second) was complemented by goals from Adam Rundle, Ben Wood, Mark Hudson and a late own goal to cap Crook’s miserable day but leave Shildon in seventh heaven.

Shildon will now travel south to take on Padiham of the Evo-Stick North, who were beaten 0-2 in their opening league match at home by Spennymoor Town on the same afternoon.

The Supporters Club is already taking names on a first come first served basis for the coach journey to cheer the lads on in the next round. Traditionally seats fill up very quickly, so get in touch by calling 07784 975451 as soon as possible to book your passage to Padiham on Saturday 30th August – just a fortnight away.