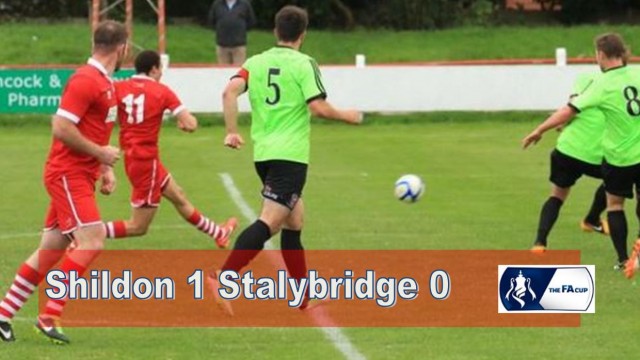 In front of a large home crowd Shildon AFC went through to the 3rd Qualifying Round of the F.A. Cup after an excellent 1 – 0 home win against Stalybridge Celtic FC from Manchester, who play in the Conference North League.

After reading Celtic’s match report written by Debbie Taylor, I think she cannot have been at the same match as everyone else. She starts her report by saying “One defensive lapse midway through the 2nd half was enough to send Celtic back home out of the F.A. Cup. Shildon seemed to have set out a plan of being dangerous from set pieces”.  Let me tell you what really happened. Shildon were the better side for the whole of the game, and despite the score being 0 – 0 at half time, the Railwaymen could easily have been at least 4 – 1 up at the break.

On 6  minutes Billy Greulich-Smith’s shot was well saved, then Darren Craddock headed downwards and over from 6 yards. Next Ben Wood headed over from a corner and Daniel Moore headed over the bar. They were not set pieces, but two corners. On 36 minutes Micky Rae was put through but keeper Lewis King blocked his shot. On 40 minutes Lee Scroggins fired into the bottom corner but again the keeper made another good stop.

Celtic, on the other hand rarely troubled Shildon’s defence. On 28 minutes No 11 Liam Dickinson’s shot was well blocked by Daniel Moore, then just before the interval an isolated attack saw Anthony Malbon hit the post and No 11 Liam Dickinson fired in the rebound into the empty net, only to be ruled off side.

There were fewer chances in the 2nd half, but Shildon were still the better side and on 59 minutes Billy Gruelich-Smith sprinted between two defenders and fires a left footer into the top corner for  a deserved lead.

After the goal, Celtic came more into the game especially down the right hand side, but not really troubling Shildon’s defence. In fact their only chance of the half was a Nathan Heath header on 82 minutes which went wide.

For Shildon, Micky Rae went close, and Billy, on the back post shot wide. Near the end Ben Wood’s effort was saved by the keeper with his feet.

After the match manager Gary Forrest said “We were superb today. We were better in every department and thoroughly deserved to win”.

Everyone in the ground including all the Celtic supporters and directors agreed Shildon were worthy winners. Celtic manager was gracious in defeat saying “I have to question the desire and commitment of some of my players. You couldn’t tell which was the full time side and which was the part time side”.