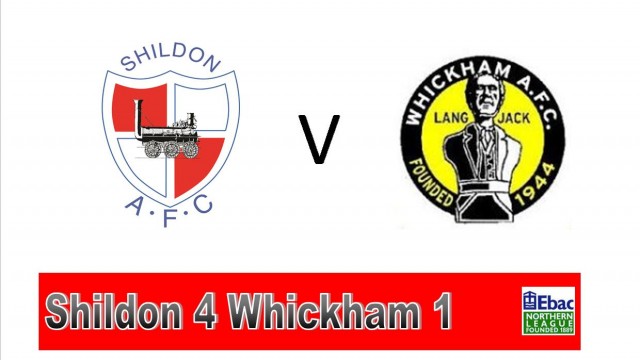 Shildon AFC progressed to the next round after a comfortable 4 – 1 win at home on Wednesday 24th September against 2nd Division side Whickham in the 1st Round of the Brook Milestone Northern League Cup.

The Railwaymen scored after 18 minutes when a good move between Emms and Wood was finished off by Micky Rae.

It was all Shildon but they were unable to add to their score before the break.

Two minutes later on 62 minutes Whickham scored with their one and only chance of the game when a left hand cross was headed in by No 6 Chad Collins.

A minute later Shildon’s Ben Wood was brought down in the area for a penalty. He picked himself up and took the kick, but it was easily saved by keeper John Mordey.

After constant Shildon pressure they finally took the lead on 80 minutes when a cross was headed home by Lee Scroggins after a tangle with the keeper. The two players were on the ground when Mordey was given a red card for kicking out at Scroggins.

Shildon streamed forward and another goal quickly followed when a close range headed by Jamie Harwood was headed over the line by Billy Greulich-Smith.

On 87 minutes Ben Wood had an open goal but he hit the bar.

Just before the whistle Billy Greulich-Smith got his 2nd goal of the night with a low left foot shot into the bottom corner.

A comfortable win. Should have won by a much bigger margin.

Shildon will be away to Tow Law in the 2nd Round.

Date to be arranged.