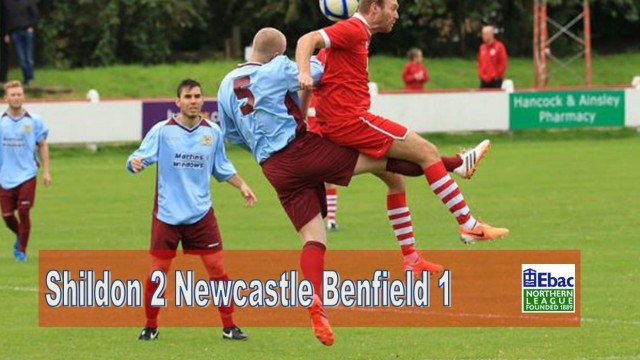 Shildon AFC got back to winning ways on Saturday 6th September at Dean Street, with a 2 – 1 win against Newcastle Benfield, with both goals being scored quite late in the game.

After Shildon’s keeper tipped over a long range effort from Mark Convery, Shildon created several chances to open the score. Mark Hudson fired straight at the keeper then headed wide, before Chris Emms’ shot was tipped over. Just before the break Emms, Paul Connor and Ben Wood all had shots one after another blocked by Benfield’s defenders.

Early in the second half Shildon had all the possession, but against the run of play, Benfield took the lead on 65 minutes when Michael Riley broke away and found Paul Brayson, who shot low past Lewis Graham.

Shildon had numerous corners and pressed hard for the equaliser, and on 83 minutes Paul Connor fired over the keeper but the ball was headed off the line by Chris Carr. Two minutes later, with time running out, the Railwaymen got their reward when Jamie Harwood fired through a crowd of players for 1 – 1.

With only a minute remaining, Micky Rae cracked in a great goal from 25 yards out for victory.