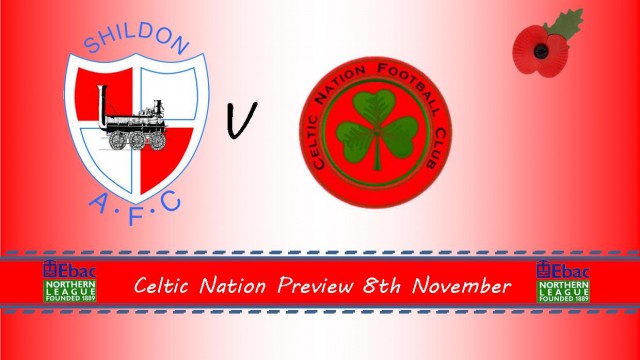 Almost exactly two months ago, on Wednesday 10th September, Shildon won an entertaining midweek game by the odd goal in five against Division One newcomers, North Shields. It was the last time the Railwayman played a home match in the Northern League.

In the intervening fourteen games, the side has played just four league matches, all of which were on their travels. Tomorrow league action returns at last to Dean Street with last season’s runners up, Celtic Nation, the visitors.

The Cumbrian club have experienced a fairy tale ride like no other non-league side over the past couple of seasons, transforming from rags to riches, only to return equally rapidly to the traditional togs of semi-professional strugglers.

When the club, financed by American-dwelling Scots-Irish multi-millionaire, Frank Lynch failed to capitalise on their cash and star player injection by winning promotion, the money dried up, the club was sold back to former chairman Steve Skinner, players moved on and the hardcore of the club was left to pick up the pieces and build again for this season.

It has proved a testing time for the Nation, who have struggled to come to terms with their fall from superstardom. Forced to rebuild late in the pre-season they currently languish in 18th place in the league but remain capable of causing trouble to any side, as 3rd placed Dunston learned to their cost in midweek.

Shildon could do worse than keep Nation’s 1-0 win on Tuesday night at the forefront of their minds tomorrow as they look to pick up points in their own campaign to win this year’s title; the visitors’ afflictions should not be taken as a guarantee of an easy time for the Railwaymen.

Billy Greulich-Smith remains a doubt as he recovers from an injury sustained at Stourbridge in the FA Cup. Carl Jones has also been recovering from a knock but is close to full fitness. Several members of the squad who have not been featuring recently received a run out in the 4-0 away win in the Durham Challenge Cup in midweek and Chris Emms in particular made a strong case for inclusion this weekend.

Tomorrow also sees Shildon AFC Development Centre’s Under 10s enjoy a matchday experience at Dean Street as special guests of the first team. The youngsters will lead their senior colleagues onto the pitch prior to kick off. Please show them your support.

Kick off tomorrow is at 3pm. Admission is £6 adults, £4 concessions and under 12s are admitted free with a paying adult.