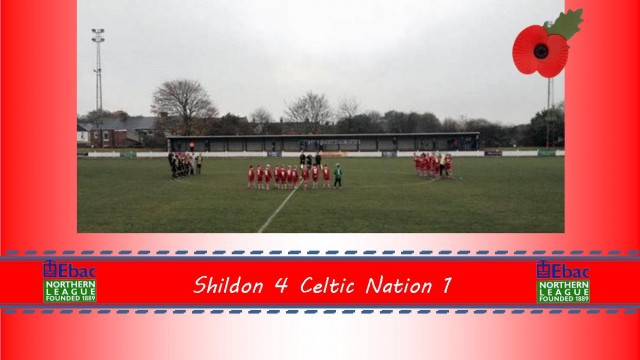 Shildon AFC finally played a league game on Saturday 8th November 2014 when they entertained Celtic Nation and were worthy 4- 1 winners. After six cup ties from their last eight games, the Railwaymen were keen to get back into league action. They took an early lead on 7 minutes when Ben Wood hooked the ball home through a crowd of players in the box. Minutes later a Micky Rae cross was put through his own goal by Tyler Bowman for 2 – 0. It was one way traffic in the 2nd half and just after the hour man-of- the-match John Brackstone’s curling free kick from outside the box gave keeper Andy Casson no chance. With 3 minutes remaining Celtic’s No 9 Jonathan Allan pulled a goal back, but Shildon restored the 3 goal lead just before the final whistle when a long cross from Adam Rundle was headed in by Paul Connor.

15) Lee Chapman on for Emms

17) Adam Rundle on for Wood