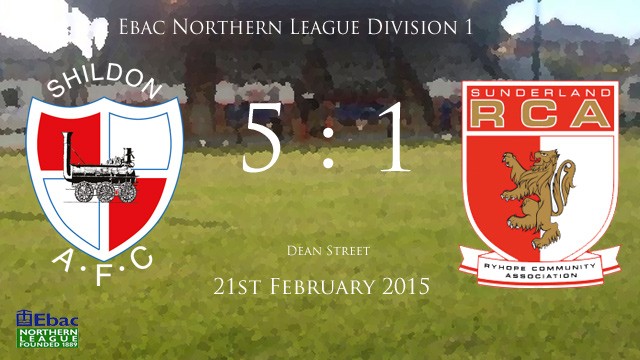 Shildon AFC are now 4th in the League

Shildon AFC are now 4th in the league with games in hand on the teams above them after another comfortable 5 – 1 home win against Sunderland RCA on Saturday 21st February 2015.

It was all Shildon from the kick off with Billy Greulich-Smith heading over on just 7 minutes. A minute later Micky Rae only had keeper Jonathan Carmichael to beat but he fired wide.

Constant home pressure paid off on 25 minutes after good work from Ben Wood who crossed for Chris Emms to fire low into the net.

After 3 more missed chances, 2 from Lee Scroggins and 1 from Chris Emms, Shildon’s persistence paid off on 44 minutes when Ben Wood found Micky Rae who squared the ball to Chris Emms for his 2nd goal of the game.

The 2nd half was a continuation of the 1st with the Railwaymen in control.

After chances by Emms, Rae, and Jones, Billy Greulich-Smith blasted home from 10 yards on 66 minutes.

Two minutes later it was 4 – 0 when Micky Rae crossed to the far post for Ben Wood to tap in.

With 12 minutes remaining Mark Doninger made it 5 – 0 when he looped the ball into the roof of the net.

On 80 minutes a sporadic RCA chance fell to Stephen Bogie, but he fired over when he could have scored, but with just 5 minutes remaining RCA’s star man No 10- Stephen Callen got a consolation goal with a long range drive through a crowd of players.

After the match manager Gary Forrest said “A good team performance once again, and another 3 points and we move on to the next game”. 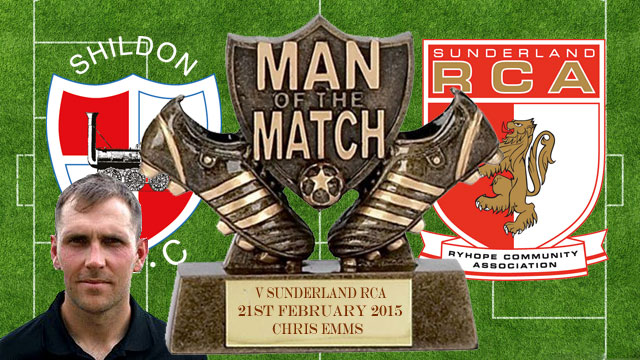