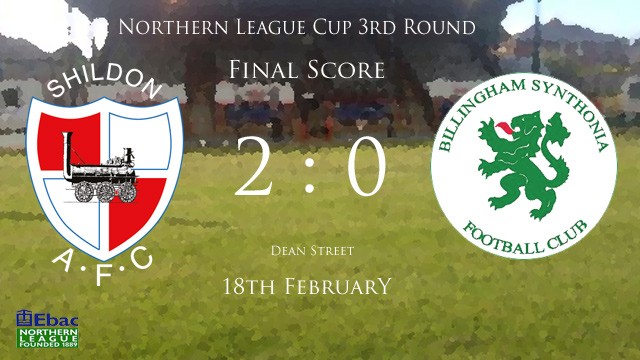 Shildon AFC are through to the Last Eight

Shildon AFC are through to the last eight of the Brooks Milestone Northern League Cup after an easy 2 – 0 home win against Billingham Synthonia on Wednesday 18th February 2015.

It was third time lucky for the game to be played as the previous two dates were cancelled because of the bad weather.

On a windy evening, it was the visitors who had the first chance of the game on 20 minutes when Ross Gardner blasted over the bar. It transpired this was the only scoring chance Synners had for the whole of the 90 minutes, with Shildon’s keeper Kyle Hayes not required to make a single save all night.

The Railwaymen took the lead on 24 minutes when a well hit free kick was fired over keeper Peter Burke for 1 – 0.

Two minutes later Ben Wood was tripped in the box for a penalty which Lee Scroggins blasted in.

On 36 minutes Shildon nearly got a third when a perfect cross from Paul Connor found Billy Greulich-Smith who headed against the post.

Kicking against the wind the 2nd half was a dull affair with Shildon’s Lee Scroggins firing over and Ben Wood firing wide, with Synners not able to muster a single shot.

Subs:  Richardson for Chapman 46, Brackstone for Moore 70, Taylor for Connor 77.

Shildon are at home in the next round to Seaham Red Star who are currently running away with the Ebac 2nd Division and are no mugs, having beaten North Shields 2 – 1 in the previous round. 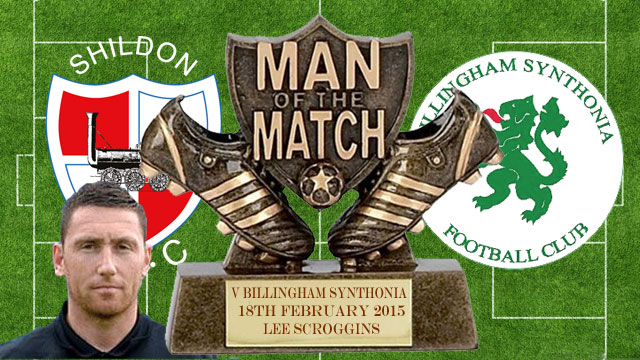