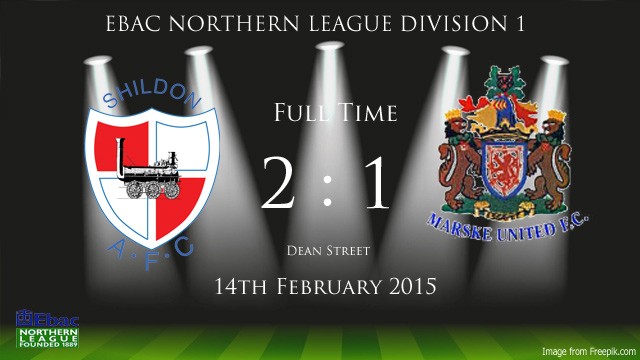 Shildon AFC keep their league title challenge on track after a close encounter with high flying 3rd placed Marske United on Saturday 17th February 2015. The Railwaymen were 2 – 1 winners after a 90 minute penalty gave the home side all 3 points.

Shildon were ahead after 10 minutes when a right wing corner from Ben Wood found Billy Greulich-Smith who headed into the top corner of the net from 6 yards out.

Marske levelled just 5 minutes later when a corner by Josh Macdonald was pushed out by keeper Kyle Hayes. Shildon’s Paul Connor thought he had cleared the ball off the line, but the assistant referee awarded a goal, given to No 5 Thomas Bott.

It was an open game with chances from both sides. Marske’s Josh Macdonald, looking well off side, was clean through but Kyle Hayes made a great block with his feet.

For Shildon Micky Rae had a one on one with the keeper Robert Dean who also blocked well with his feet.

On the hour a Ben Wood scissor kick went just wide, before Wood was through on goal but keeper Dean saved the day..

For Marske, a Darren Hollingsworth power drive was stopped by keeper Hayes.

After a Billy Greulich-Smith header and Mark Doninger firing into the side netting from 6 yards out, it looked like the game would end up all square, but on the 90th minute Adam Wheatley handled in the box for a penalty which Lee Scroggins blasted into the roof of the net.

Shortly after the goal there was a massive fracas with several players from both side involved, but remarkably, no one was booked. The game finished on 97 minutes.

After the match manager Gary Forrest said “It was a good solid team performance today against a very good side. We kept our shape, and they never really hurt us, and to be fair, it was a soft goal. We edged it on the day and deserved to win”. 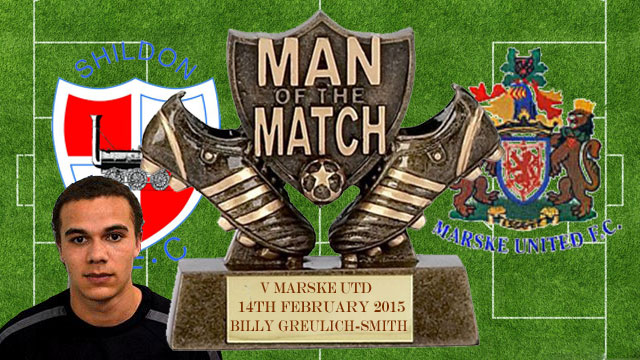