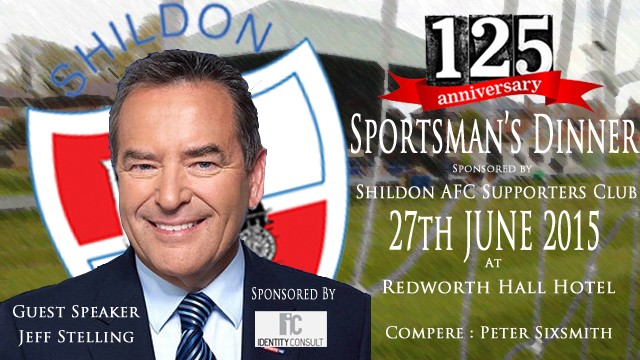 Shildon Football Club, founded in 1890, is celebrating its 125th anniversary this year.

In recognition of this milestone, the club – which is this season competing for its first league title in 75 years – is hosting a commemorative Sportsman’s Dinner, sponsored by Shildon AFC Supporters Club, at County Durham’s prestigious Redworth Hall.

Since 1994, football fans across the nation have enjoyed listening to Hartlepool fan Stelling’s frenetic goal announcements as the presenter of Gillette Soccer Saturday for Sky Sports. He also presents Sky’s coverage of the Champions League and from 2009 until 2011 he presented Channel 4’s cult afternoon quiz show, Countdown.

The popular presenter has been named as Sports Broadcaster of the Year for five successive years by the Sports Journalists’ Association, based on a poll of its members, making him the only broadcaster to win the award since its inauguration.

The evening will be compered by local non-league groundhopper, well-known Sunderland and Shildon fan and fount of non-league knowledge, Peter Sixsmith.

Tickets for the event, which takes place on Saturday 27th June from 7pm, are priced at £40 and are available now. Tables of ten are available at £400 per table but tickets are selling fast with half the available tables already booked. Bookings will be on a first come, first served basis. Anyone wishing to attend is advised to reserve their seat or table as soon as possible to avoid disappointment.

To book your seat or table at this illustrious event, which has a smart casual dress code (no jeans or trainers) contact Shildon AFC Director, Norman Smith on 07500 874505 or by email at norman.smith@shildonafc.com. 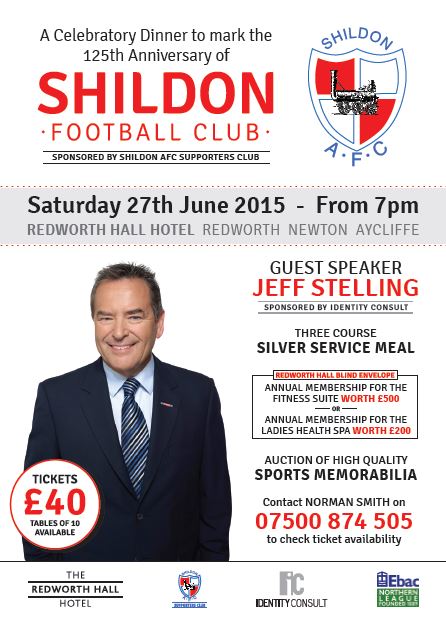