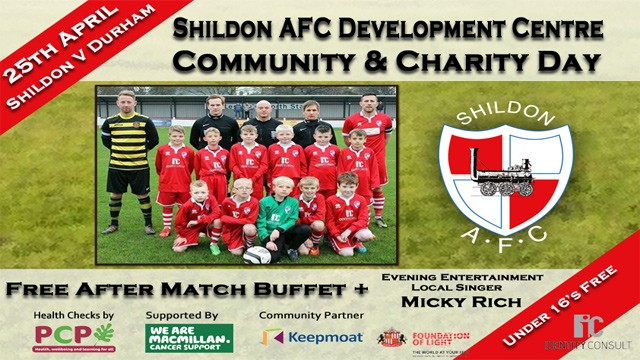 Shildon’s final home game of the season will not only play a part in the destination of this season’s championship, but is also set to be a special Community and Charity Day.

As part of their fundraising, there will be a bucket collection for Macmillan Cancer Support at the match on Saturday. We ask that you give as generously as you are able to this worthy charity.

Additionally, volunteers from Pioneering Care Partnership, a local charity that covers Aycliffe and Shildon, will be in attendance to talk to supporters and to provide mini health checks.

The club will also be celebrating the phenomenal progress of the Shildon AFC Development Centre and its tremendous growth to take in teams from under 7s all the way to under 18s. Many of the young players and their parents will be attending on the day.

Identity Consult, who sponsor the Development Centre, will be providing a free buffet after Saturday’s match and all are welcome to stay behind and take part. The initiative is also supported by Community Partners, Keepmoat and the Foundation of Light.

The free post match buffet will be followed by entertainment in the form of local singer, Micky Rich.

We hope as many people from the town as possible can come along and lend their support to the charity collection, the Development Centre, and of course the first team as they attempt to win the league title for the town for the first time in 75 years.