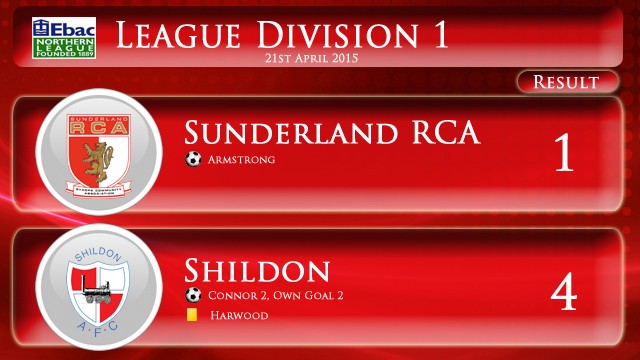 Shildon AFC Still on Course to Win the League

After a comfortable 4 – 1 away win at Sunderland RCA on Tuesday 21st April 2015, Shildon AFC are still on course to win the league. The Railwaymen have only two league games left, and if they win them both they will be crowned champions. The last time Shildon won the league was the 1939-40 season, some 75 years ago.

A big crowd is expected at Dean Street on Saturday 25th April when the Railwaymen entertain Durham City in their last home game of the season. The following Wednesday 29th April they travel to Bedlington Terriers for their final away game.

Shildon took an early lead on 6 minutes when a cross from Billy Greulich-Smith was fired into his own goal by RCA’s No 4 Lee Bythway.

Ten minutes later it was 2 – 0 when a long ball from Chris Emms found Paul Connor who hustled his way through and beat keeper Carl Morris.

It was all Shildon and before the half hour it was 3 – 0 when a Paul Connor shot hit the bar and keeper Morris punched the ball into his own net for RCA’s second own goal.

It was a similar pattern in the second half with Shildon in control, with Billy Greulich-Smith heading wide and Chris Emms firing over from 6 yards.

Shildon went 4 – 0 up on 67 minutes when a cross from Billy was headed in from close range by Paul Connor.

RCA were unlucky not to score when a cracking long range drive from Michael Charlton hit the bar, with keeper Lewis Graham well beaten.

For Shildon, Chris Emms ran through and beat two defenders but keeper Morris made a good stop.

Near the end RCA pulled a goal back when a corner kick was headed home by James Armstrong.

Subs:  Hodgson for Jones 19, Richardson for Moore 64, Scoggins for Connor 68.

After the match manager Gary Forrest said “Another good display. If we carry on with the same attitude and determination they we’ve got every chance of winning the league. There are only two games left but we must win them both and cannot afford any slip ups”.

Shildon have another important match to play on Tuesday 5th May when they are at Heritage Park, Bishop Auckland in the final of the League Cup against Newton Aycliffe. The kick off is 7 00pm not 7 30pm.