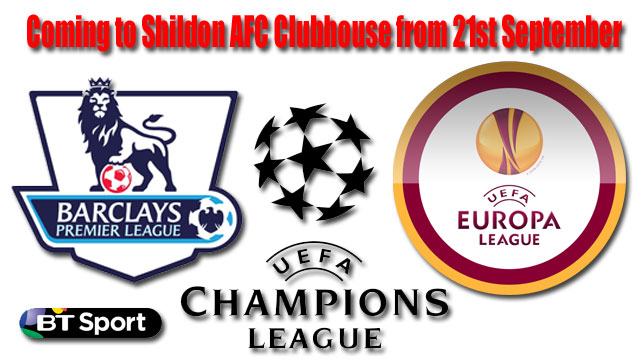 PREMIER, CHAMPIONS AND EUROPA LEAGUE AT THE CLUBHOUSE

As if there wasn’t enough reason to head for the Shildon Clubhouse, the latest news that the club will be installing BT Sport on Monday 21st September is yet another.

From then, fans will be able to enjoy live Premier and Scottish League games on Friday nights and Saturday mornings; live European football on Saturday evenings; live Champions League matches on Tuesdays and Wednesdays on the only UK channel with exclusive CL rights and live Europa League action on Thursday evenings.

So, if you want to enjoy a Premier League match on Saturday morning, what better way than in the clubhouse before wandering outside to see the BIG match kick off at Dean Street in the afternoon.

The first Premier League match available in the clubhouse will be Tottenham Hotspur v Manchester City on Saturday 26th September from 12 noon while customers can enjoy a choice of Champions League action (including Arsenal v Olympiakos and Porto v Chelsea) from Tuesday 29th September.

See you all there!