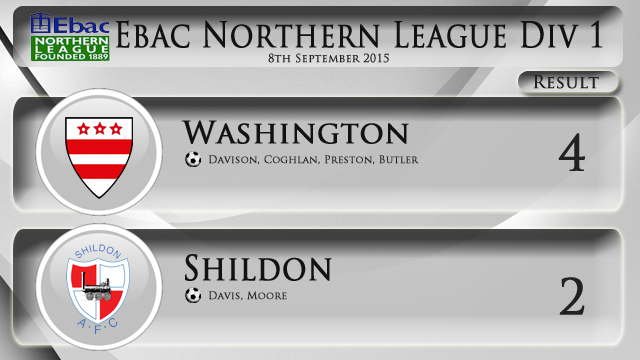 Top of the league Shildon AFC travelled to second placed Washington FC on Tuesday 8th September 2015 in the Ebac Northern League, with the Railwaymen going down 4 – 2.

The Mechanics are the surprise team of the season, having not lost a single game so far in all competitions.

They were ahead after just 90 seconds when captain Mark Davison fired past Shildon’s stand in keeper Jake Johnson.

Shildon thought they had equalised after 6 minutes but Mark Doninger’s shot was ruled off side. However, they did level on 11 minutes when Paul Connor found Jonathan Davis.

Washington were ahead straight from the kick off when a right wing cross found Michael Cochrane whose long range drive beat injured keeper Johnson.

The home side piled on the pressure with Shildon’s Dan groves clearing off the line.

Against the run of play Shildon pulled a goal back when Bobby Moore fired low into the bottom corner.

Shildon can have no qualms about the result as Washington were the far better side on the night, particularly in the second half.