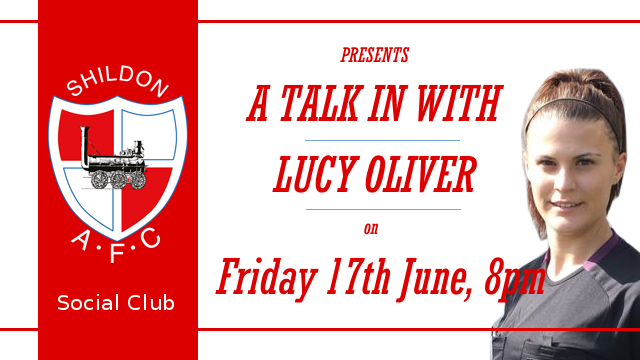 Talk in with Lucy Oliver

Referee Lucy Oliver will be visiting the Social Club on Friday 17th June at 8pm to give a talk in.

A current Level 3 referee. Lucy is determined that, through ongoing training and development, she will reach her target of the Football League and Women’s FIFA list. She was awarded the Three Lions in May 2011 after acting as an Assistant Referee on The FA Women’s Cup Final and has since officiated on International fixtures. Selected to represent The FA at the Dallas Cup in April 2012 as part of the National Referee Development Group and has also since visited Japan to referee.

Additionally Lucy volunteers as an ambassador to raise the profile of women referees as an under represented priority group, acts as a role model to give wider support to existing referees and helps the recruitment and development of other referees through tutoring. Since the role began she has assisted the organization of National and Regional Development events, created the Pink Whistle social media support mechanism and produced Highlights Magazine which promotes the role of and successes achieved by female referees.

Tickets will be available free from the Social Club.