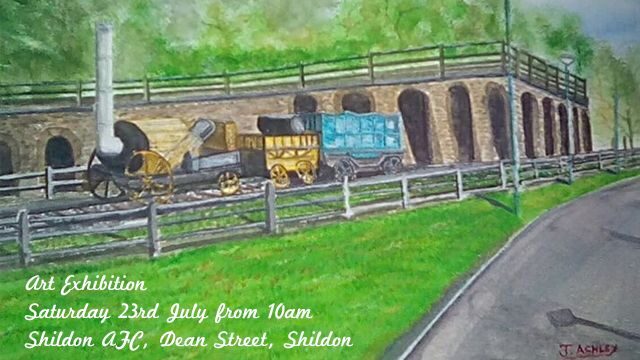 To coincide with the visit of the Flying Scotsman to Shildon there are a series of events being held in the town.

At Shildon AFC there will be an art exhibition by local artist John Ashley, the clubhouse and bar will be open from 10am.

Taken from the Shildon Town Crier:-

Local artist, John Ashley, has risen to the challenge of the Flying Scotsman visit by arranging to exhibit his work at Shildon AFC on Saturday 23rd July, in the Shildon Town Football Club clubhouse. Born in Hartlepool, John joined the army as a military musician and served for 23 enjoyable years from the age of 16. John was always interested in art, but, sadly, always much too busy to pursue his interest to any great extent. However, a serious illness three years ago changed this. Left wheelchair bound and unable to work, John bought himself a set of water colours and, since then, has never looked back. After leaving the army, John at first settled in Darlington. However, a recent move to Shildon, has meant that he has found a new direction for his work. Inspired by the railway history of Shildon, his work has expanded and now encompasses this aspect of Shildon’s heritage. The full range of John’s work will be available to see free of charge on 23rd July at Shildon AFC. John said he would welcome an opportunity to talk to visitors about his work.