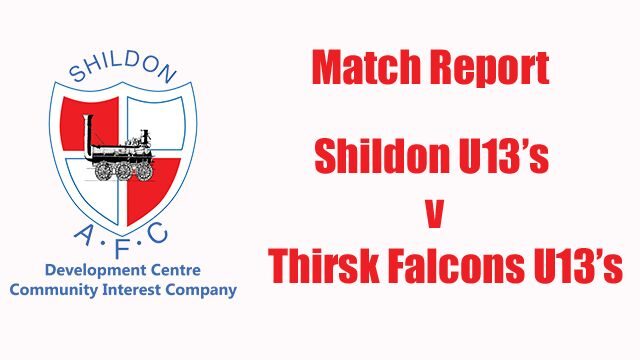 Shildon Under 13’s on the Up

Shildon U13s On The Up

After a 2-0 win in the cup against Leven last weekend Shildon U13s went into their league game with their heads held high this week against Thirsk Falcons FC.

However straight from the kick off Thirsk broke through our defence and scored immediately. Shildon restarted the game and started to pass the ball round well using their wings to their advantage and testing the oppositions keeper. Shildon were awarded a corner which James Rusby took and curled it into the top right to level proceedings. From then on Shildon were the most dominant team but when their defence was needed they did the job and cleared their lines. Two goals from Chloe Wymer and another two from James Rusby made it 5 -1 until we conceded just before half time making it 5-2.

Second half and Shildon were facing uphill which made it a little harder but they dug in and managed to get into a rhythm again using the wings. A great ball whipped in from the right for Ellie Geary to get her foot to it and tap it into the net. Minutes later Ellie added to her tally after a nice through ball saw her latch onto it and place it in to the back of the net. For the next 10 minutes a great battle from both teams midfielders saw the game settle down a bit. Shildon were giving a few corners away but their defence and keeper dealt with the pressure well. Five minutes from time James Rusby scored making it 8-2 at the final whistle.

James Rusby and Chloe Wymer were given joint players of the match but a great team performance from all.

Next up a difficult away tie in the league cup against a tough division 1 side Nunthorpe A.