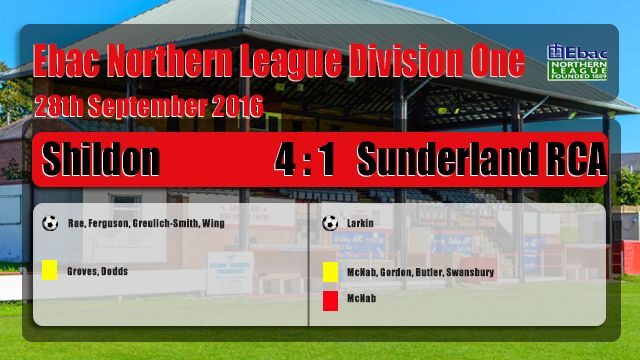 Sunderland RCA started brightly and went ahead when a cross ball evaded a stretching Matty Robson and fell to Larkin who placed the ball past Liversedge in the Shildon goal.

After already been booked Ross McNab was judged to have brought Ferguson down when through on goal and was sent off. Micky Rae leveled the scores just before half time with a header from a Lewis Dodds cross.

In the second half Shildon made the man advantage count with 3 further goals, first the goal of the night when David Ferguson beat two players and curled the ball into the top corner of the net. Then Billy Greulich-Smith tapped in to make it 3-1 and finally Lewis Wing added the fourth placing it passed the keeper.