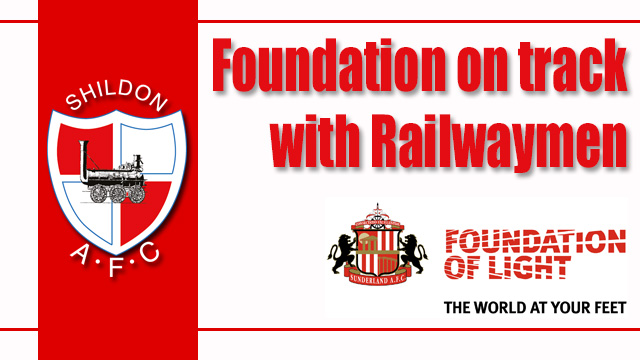 Foundation on Track with The Railwaymen

The innovative link-up will create further exit routes and opportunities for young players and coaches via the Foundation’s Player Pathway and Sports Education programmes as well as giving Shildon AFC youth teams use of world-class sports facilities at the Beacon of Light.

Building on existing connections which sees the Shildon-based Football Scholarship squads utilise Dean Street’s facilities for training and NFYL matches, the partnership will provide promising Scholars from Sunderland, North Durham and South Durham with progression into the Railwaymen’s under-18 squads and beyond.

Jamie Wright, Foundation of Light’s Assistant Director for Sales and Delivery, said: “We have always had strong exit routes and building on our existing partnership with Shildon AFC will give more young people opportunities that they might not get otherwise.

“Together we will provide a first-class environment to develop the skills and techniques of those looking to forge a career in football and sport.

“The Foundation has developed strong community links in Shildon for a number of years with the aim of raising aspirations for young people in the town, and now we can offer these opportunities to those across the North East.”

From the 2018-19 season, Shildon AFC’s Development and Under 18 squads will utilise the Beacon’s state-of-the art roof-top football barn and outdoor pitches for training sessions alongside the Foundation’s Scholarship teams and Community Clubs, sharing best coaching practice.

David Dent, Shildon AFC Chairman, added: “This is an exciting partnership for Shildon AFC and a really important milestone in our ambitions to create a sustainable Club which will play at the highest level possible it can within the National League system.

Our partnership with the Foundation of Light gives us access to some of the best young talent within the North East and strengthens our commitment to creating opportunities for young adults and children in the town.

Foundation of Light’s Player Pathway provides all players with the opportunity to access a coaching programme that enables them to learn and develop new skills in a fun and challenging environment.

The pioneering Football Scholarship programme was established in 2016 through a partnership between Foundation of Light, South Tyneside College and Monkwearmouth Sixth Form College.

Earlier this season, Scholars representing the Monkwearmouth and Shildon teams signed contracts with Premier League side Burnley FC, while every learner who has applied for University has received unconditional offers.

More than just football, Coaches Academy gives youngsters the qualifications and skills needed to pursue a career in the sports coaching industry.

Foundation of Light is holding Open Trials for its Football Scholarship programme during the Easter holidays. For more information, call 0191 5515077 or email jade.royal@foundationoflight.co.uk.