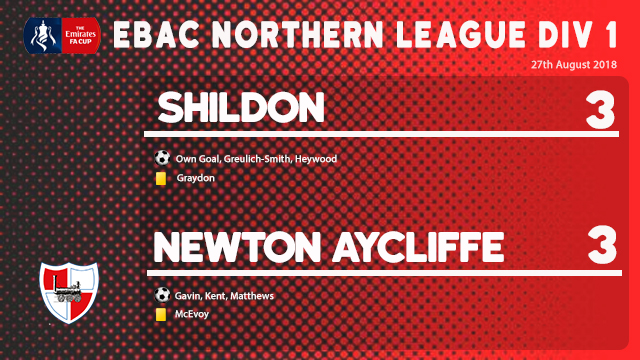 Newton Aycliffe scored with 11 minutes left of the game to gain a point in front of a crowd of 448 at Dean Street.

Shildon took the lead after 12mins when the linesman judged the ball to be over the line. 6 minutes later Newton Aycliffe were 2-1 up. The equaliser was a brilliant free kick from Tom Gavin and then Daniel Kent glanced in a cross from Alan Harrison.

In the second half Billy Greulich-Smith made an instant impact after coming on, heading in a cross from Jack Blackford. Man Of The Match Aidan Heywood then gave Shildon a 3-2 only for Newton Aycliffe substitute Kurt Matthews to equalise