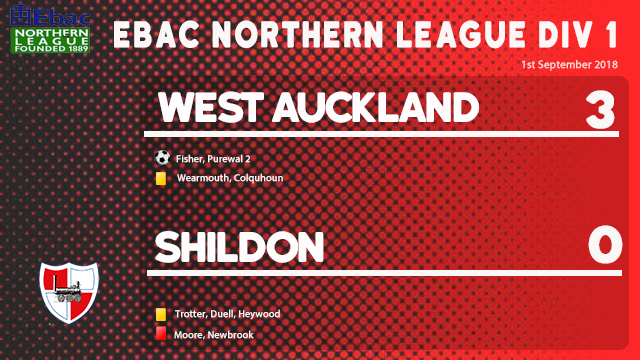 Shildon’s unbeaten start to the league ended with a 3-0 defeat to local rivals West Auckland.

Daniel Moore and Shaun Newbrook were both sent of as Shildon ended the game with 9 men.

Nathan Fisher opened the scoring after 41mins with a well taken goal which flew into the top corner of the net. Danny Earl had a couple of chances to level early in the second half, but a good save from Shane Bland denied the Shildon front man.

After 86mins Amar Purewal made it 2-0 and a minute later the Shildon keeper was sent off after receiving 2 yellow cards in the space of 30 seconds. Purewall then added a third in the 2nd minute of injury time.