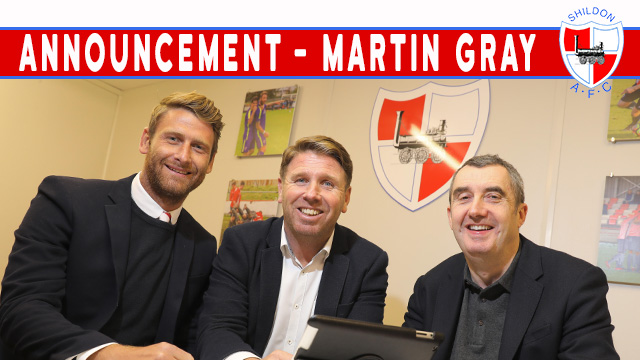 David Dent, chairman Shildon AFC said “We are building on the clubs strong foundations to help us realise our ambitions on and off the pitch. Martin’s appointment is a defining moment in the club’s history. He is an exceptional coach and manager and brings strong leadership skills which will assist first team manager, Daniel Moore in realising his ambitions of managing Shildon AFC at a higher level.

Dent went on to say “we have spent a great deal of time planning the clubs next step and Martin is an essential part of this and he is as excited as I am at the challenge ahead. This is a five year project and I am confident we will see Shildon competing in the Northern Premier League, with a successful Academy behind us. This forms a crucial part of the work which is ongoing with our community club sponsor Livin allowing the club to be truly engaged with our local community”.

Martin Gray said ” I was approached a number of weeks ago by David to discuss the opportunity of taking Shildon forward and progressing up the leagues. His vision, the project ahead and the role of sporting director excites me, I had numerous management offers earlier in the season but they have not been right for me. This feels right”

“It’s about the bigger picture for the club and Shildon. As soon as I met with David and we discussed the plans for the wider community, it was easy to see how we could work in partnership to achieve this. I have had subsequent meetings with David and manager Daniel Moore and we are united in our thoughts moving forward”

Daniel Moore, Shildon AFC Manager said: “ Having met Martin and spoken with him and David at length about our plans for the future, I can say there are exciting times ahead for the club, the town, the players and myself.

Moore went on to say: “Martin has a wealth of experience in professional and non league football which I can tap into and that can only help the development of myself as a manager and the professional running of the club which I have worked hard on over the last two years”.

Shildon AFC have further plans which will see Harry Dunn appointed Head of Recruitment and further investment secured. Dunn who has worked with Martin in the past is starting work immediately for this and next season.