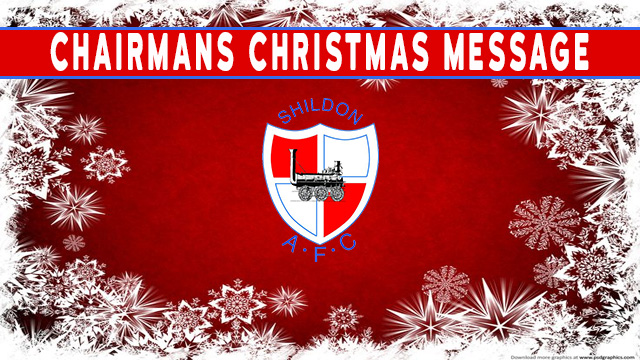 2018 has been a mixed year for the Club. We’ve made huge strides off the pitch but on the field has been disappointing

I put together a budget at the beginning of the season which the Management team agreed would allow us to compete at the top of the League. That hasn’t happened, neither have we had a good Vase run. Believe me there is no one more disappointed than me

We needed to make some radical changes which I’ve done with the introduction of Martin and changes to the Management and playing staff. Martin subsequently introduced a new training regime for the Players and we are now seeing the first signs of our Academy coming through. Dan made changes to the squad and brought in Dane Eltringham, and Oscar Eckley-Aldsworth came on against Newton Aycliffe who’s only 16. Mason Hurworth was on the bench recently and both Ben Reay who plays for our Under 17’s and Steve Johnson, son of Steve Senior who some of you will remember as a former Shildon player, now all train with the first team and have signed first team deals. These players are all 17 and represent the future of the Club. On top of that we are now seeing the development of Aidan Heywood, Brad Hird, Aaron Duell and Dom Curl all of whom are 21 or under

I appreciate that young talented footballers alone will not take the Club forward and that’s why we are delighted to sign a proven NL Centre Half in Dale Mulligan who last May played at Wembley in an FA Vase final. This will allow Dan Moore to concentrate on improving the squad performance and to develop as a Manager. We are looking to make one or two additions during the course of this season but only if they can enhance the squad and contribute towards a team that must challenge at the top next season.

We can’t turn this Club around overnight, it will take time. We have a 5 year plan to take this Club as high as we can and we want all of you and the wider community to come on this journey with us

The remainder of this season is all about improving on and off the pitch. Off the pitch I’ve restructured the Board to attract investors to the Club to help us have the necessary budget to challenge for the League title next season. The Academy is starting to take shape with new players attracted to the Club and I’m really proud of what we are doing for the local community. Believe me myself and Martin are working really hard behind the scenes and we are making progress.

On the pitch Dan Moore has a target to finish in the top 6 which I think is more than achievable with the squad. This, coupled with one or two additions to the team, will give us some momentum as we move into next season

It’s been a hard year for us all but I’m absolutely sure with all of your support we will take this Club to a level that it’s never played at before.