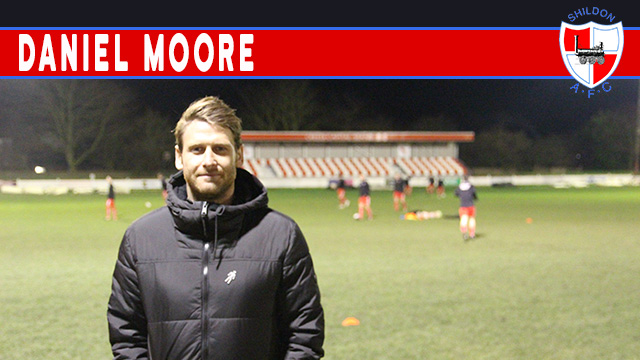 Moore signed a three year contract with the club back in January 2017 and took the club to forth position in the Northern League in his first season and third in his second.  He also took Shildon to the FA cup forth qualifying round last season and won the Cleator Cup.

Aged 34, Moore is a young, driven and increasingly experienced manager who believes in giving the clubs emerging talent an opportunity on the pitch, whilst maintaining a strong performing squad.   An ethos which has seen the club climb to sixth position in the league table with 12 games to go.

The anniversary falls within weeks of reaching 500 games played for the club and 100 games managed.

Moore said : “I am proud of how far the team has come in the past two years and more so in the last six months.  There have been changes both on the pitch and off the pitch which ultimately improve individual and team performance.  I am already taking steps to secure a solid start to the next season and I am looking forward to the challenges ahead”

David Dent, chairman of Shildon AFC added : “ Daniel has made a great start to his managerial career and we have now put a structure in place where he can only continue to improve. Daniel is aware of the level of investment that is going into the Club as we seek to achieve our ambitions on and off the pitch and he has a major part to play in realising those objectives. I think now we are starting to see the results of this on the pitch and I’m hopeful that this is just the beginning “