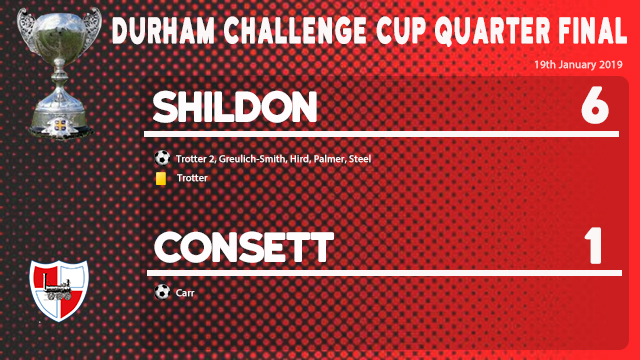 Shildon are into the semi final of the Durham Challenge Cup with a 6-1 victory over Consett at Dean Street.

In the squad were 9 players under the age of 21 with 17 year old Mason Hurworth impressing from the start.

Ben Trotter (9 mins) opened the scoring with a header from a Matty Robson only for Luke Carr to equalise after 22mins. Brad Hird was then fouled in the box and Billy Greulich-Smith restored the advantage.

In the second half David Palmer added the 3rd, Brad Hird the 4th and Nathan Steel the 5th. Steven Johnson then produced some great play to beat his man and set up Ben Trotter to finish the scoring.