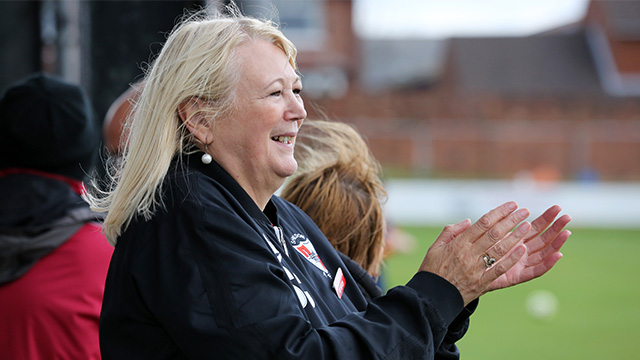 Partygoers can expect a music filled evening reliving the 60’s and 70’s performed by the ‘Travellin Band’.  There will be a raffle, tombola and auction with extensive prizes including a signed football shirt from Middlesbrough, family voucher for one year to Alnwick Castle, entry to Beamish Hall, golf days at Bishop Auckland, Hallgarth, and Ramside Hall, weekend tickets for Croft racing circuit, spa vouchers at various locations and afternoon tea vouchers for local hotel Redworth Hall, Hardwick Hall and Seaham Hall, to name but a few.

The annual event, hosted by ex Wimbledon player Carlton Fairweather, raises money for Diabetes UK, Prosthetic Limb Centre, James Cook Hospital and the football club.  It has run annually for six years since the sad passing of Miss Charlton’s partner, John Hay who was supporting his team Shildon AFC in a Durham Challenge Cup tie against Seaham Red Star when he collapsed in January 2013.

Miss Charlton said  : “ I cannot thank everyone enough for their huge generosity. Not only our football community but the wider community have really come together to support the event.  I am so overwhelmed with the amount of prizes donated, I am sure we will beat our fundraising total from last year ”