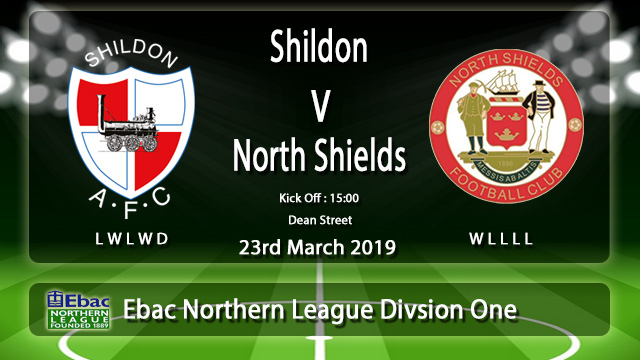 Shildon will look to continue their unbeaten run as they welcome a high scoring North Shields side to Dean Street this Saturday, in a game that promises excitement.

The Railway men are unbeaten in all competitions since their 2-0 victory over Hartlepool in the semi-finals of the Durham Challenge Cup back in February.

A run that manager Daniel Moore is keen to continue after challenging the players to see out the remainder of season undefeated.

So far, the players have responded well to the manager’s challenge, despite a disappointing result home to Whitley Bay, drawing 2-2.

However, the Shildon boss still felt there was cause for celebration looking ahead to the remainder of the season.

He said, “I was, and the players were disappointed to only take a point out of the game last week against Whitley Bay, even though we had 10 men for the majority of the game, so that says a lot about the character and desire to win”.

Saturday’s matchup also is an opportunity for Shildon to leap-frog their opponents up into 7th place ever closer to the top six and the boss has not underestimated the importance a win may have.

“Tomorrow is a big game if we want to finish in the top six, we have to win, simple as that”.

Shildon currently sit two behind the away side as well as having a match in hand. The Railway men come into Saturday’s fixture with little in the way of selection concerns, the only notable absentee being forward Zac Atkinson who misses out through suspension.