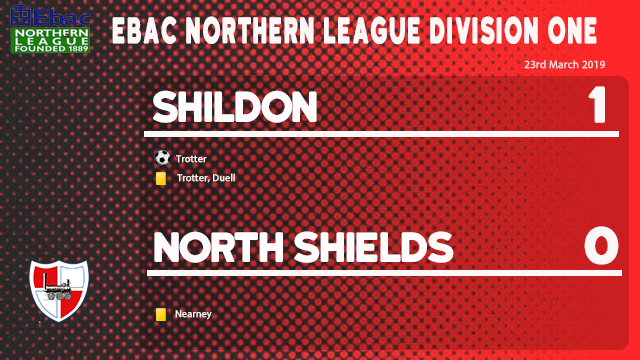 Shildon continued their unbeaten form as they cruised home to a comfortable 1-0 victory over a dogged North Shields.

The home supporters had to wait until the 56th minute for the lone goal of the contest as hometown boy Ben Trotter, slotted home a lovely curling strike from the left edge of the North Shields box to find the far corner.

It could well have been two though as the Railway Men had a goal disallowed only moments before as forward Billy Greulich-Smith found himself free in the box, burying the chance only to be ruled out for offside.

The home side were by far the better of the two all match long, as North Shields struggled to make inroads into Shildon’s half for most of the game.

An opinion shared by manager Daniel Moore at full time who said, “We stayed switched on, I think we dominated the game from start to finish”.

“I love a 1-0, clean sheet, but I said at half time just keep plugging away and it will come, and it was a great finish from Ben”.

The result now sees Shildon leap frog North Shields up into 7th still with a game in hand and manager Moore is looking for the team to use Saturday’s result as a benchmark for the remainder of the season and beyond.

“I said to them a few weeks back to finish unbeaten”.

“We go above them now, so the aim is to finish as high as possible and get into good habits looking forward to next season”.

Shildon’s attention will now switch to a trip to Whickham next Saturday in search of another three points and maintaining that unbeaten record.