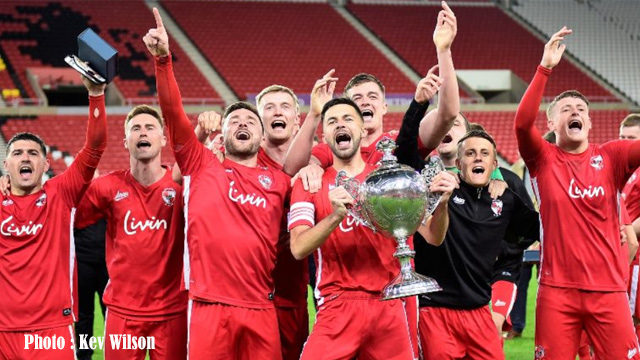 An impressive 600 fans from the Shildon community traveled to Sunderland’s Stadium of Light to support the club on Friday 3 May 2019.

Russell Henderson, Shildon AFC supporter’s club representative said: “what a night to remember! I’ve followed Shildon since the 70’s and its moments like these where the whole community is united that you really remember. The club have seen lots of changes over this last six months and they are really starting to pay off”

Included in the supporters were Joseph Brunson and Luke Thompson who won family tickets to the final at the recent Easter activities club held at Dean Street, Shildon.  The two boys enjoyed free transport to the match with their families as well as witnessing what proved to be a great end to the season for Shildon AFC.

David Dent, chairman of Shildon AFC said : “ We are understandably over the moon with our win, in what we think is one the most important competitions in the region. But what we are really humbled by is the huge community support we received in the run up until the final, and on the night itself. He went onto add: “Preparations are already underway for 2019/20 season and we are looking forward to that continued support in what is going to be an exciting year ahead, both on and off the pitch”