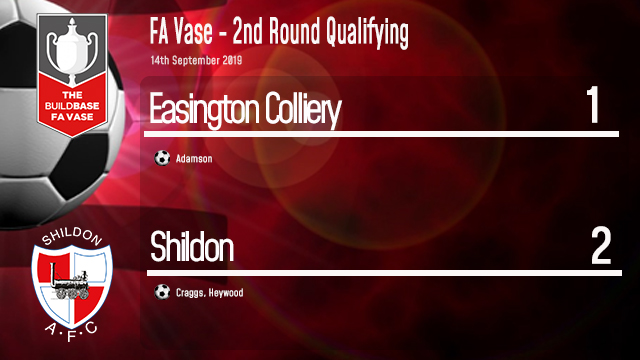 Shildon are through to the next round of the FA Vase after a 2-1 victory in a wind affected game at Easington.

Shildon kicking with the wind in the first half scored 2 goals through Danny Craggs and Aidan Heywood. Danny Craggs from a free kick after 12 mins that floated over the keeper. Aidan Heywood then curled a shot to the goalkeepers right after 35 mins. Shildon had a few other chances but didn’t take them through Craggs, Matthews and Greulich-Smith.

In the second half Dom Curl played a back pass too short and Liam Anderson stole in to reduce the deficit. Shaun Newbrook made a couple of good saves and Shildon held out for the win.