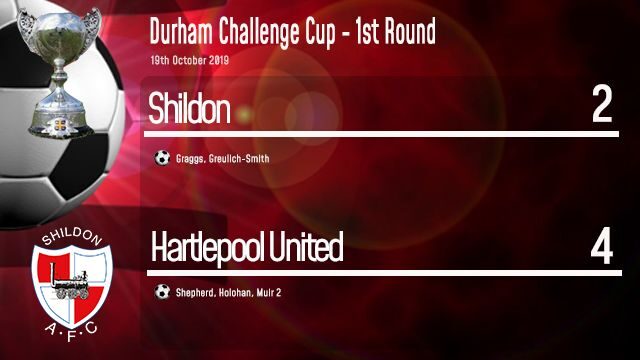 Niko Muir scored twice and Luke Williams made his comeback from injury as Pools defeated Shildon 4-2 in the Durham County Challenge Cup at Dean Street on Wednesday evening.

Front man Muir showed a ruthless edge inside the area to strike twice, while Coleby Shepherd and Gavan Holohan also found the net as Pools knocked out holders Shildon.

The icing on the cake was the return of midfield man Williams, who played the last 25 minutes of the First Round tie after recovering from surgery on his knee.

Antony Sweeney had opted to name a strong squad for the game at Shildon, giving several First Team players the chance to get minutes under their belts against The Railwaymen.

Luke James almost put Pools in front on 15 minutes when he was slipped through by Muir but home keeper Shaun Newbrook was out quickly to save with his feet, while Jason Kennedy fired just over moments later following some good football from Sweeney’s side.

The goal arrived on 21 minutes when another lovely touch by Muir freed young midfielder Shepherd in to the area and he jinked around a few desperate challenges before slotting a cool finish beneath Newbrook and in to the net.

Shildon came out firing at the start of the second half and Daniel Craggs came mightily close to bringing them level with a thunderous drive from thirty yards which fizzed just wide of Brad Young’s upright.

However, Craggs didn’t have to wait long to find the net when he took charge of a direct free-kick twenty yards out and planted a sweet shot in to the bottom left-hand corner to make it 1-1 on 53 minutes.

The equaliser served only to anger Pools though and they were back in front on the hour-mark when Holohan took matters in to his own hands with a driving run to the right of the area and a drilled finish across the keeper.

And it was 3-1 just two minutes later when another sweeping move down the right sent James away in to the box and his intelligent ball across found Muir who produced a smart turn and emphatic finish for 3-1.

Kenton Richardson was close to scoring when his looping cross from the right deceived Newbrook and came back off the bar, while at the other end Billy Greulich-Smith rattled the woodwork after a brilliant run from Jordan Lavery.

Muir doubled his tally ten minutes from time with a beautiful backheel flick finish after positive play from Shepherd on the right had opened up the home defence once again.

To their credit, the hosts rallied in the closing stages and they pulled a goal back when former Pools striker Greulich-Smith planted a header in to the net from a left-wing corner.

Young Pools substitute Joe Grey forced a good save from Newbrook in the closing stages before Brad Young denied Greulich-Smith a second at the other end with a fine save right at the death.