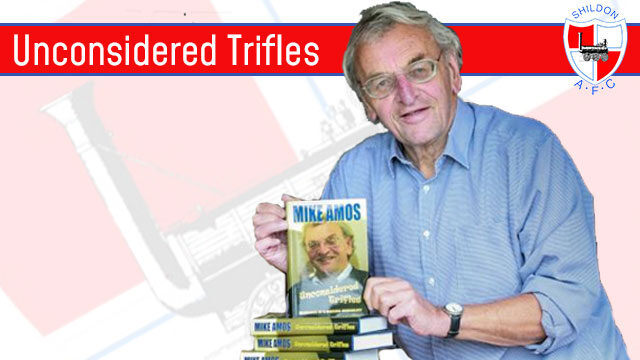 “Almost a year after it was conceived, gestation period of a hairy mammoth, the autobiography – or at least the softback edition – is here.

Unconsidered Trifles arrived this morning in a three-car convoy from the printer’s in Middlesbrough. Now the hard work really starts, shifting the things again.

Sub-titled Memories of a Jobbing Journalist, as can probably be seen above, it’s by no means just a football book – rather a snapshot of North-East life and folk over many decades – but footy provides a constant and a recurring theme.

There are wonderful stories like the afternoon that Stanhope Town played Wearhead United, nether regions of the Crook and District league second division, at the Stadium of Light or the evening that the inmates of Holme House prison in Stockton played Roseworth Social Club within those walls, perhaps the first occasion since Newgate that spectators have been charged to get into a prison.

There’s a first-hand account of West Auckland’s ill-starred trip to Turin to mark the centenary in 2009 of their first World Cup win, several affectionate stories about Graham Kelly – “the most traduced man in football” – and all manner of Northern League memories.

One of my favourites is about the ultra-posh banquet to mark the FA’s 150th anniversary – Prince William, Sepp Blatter and me. In where draughts cannot? Suffice that those who believe there’s only one Mike Amos may be mistaken.

Though the spread is regional, occasionally beyond, there’s inevitably a slight bias towards Shildon. The book launch was planned for the Dean Street clubhouse before the virus compelled a change of plan.

.So now I need to sell a few books – to blog readers, their friends, pretty much anyone. The softback, beautifully produced and designed, is £10. The hardback will be £22.  Postage for the softback is £3 20, dunno about the hardback yet.”

It’s available via Amazon or by post from me at 8 Oakfields, Middleton Tyas, Richmond, North Yorks DL10 6SD. Cheques payable to Mike Amos. Payment can also be made on-line – details from mikeamos81@aol.com

Mikes blog can be found here