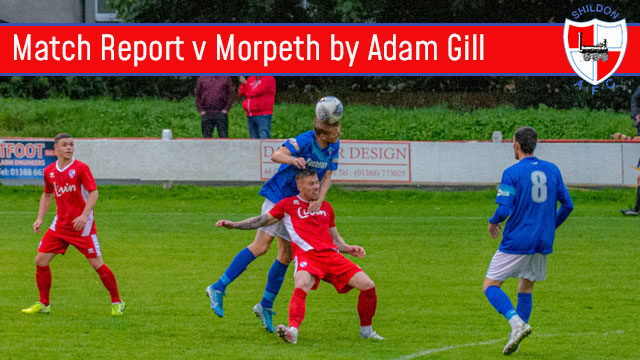 Shildon suffered defeat in their final game of pre-season as they were beaten by Morpeth Town at Dean Street.

Danny Craggs pulled a goal back in the 87th minute from the spot after Daniel Moore was brought down in the area.

Shildon had the first chance of the game in the 13th minute, when Chay Liddle skipped past two defenders before his curling effort was saved by Morpeth keeper Dan Lowson.

The away side went close to taking the lead when Connor Oliver turned his man on the edge of the box, before sending his effort just wide of the post.

Morpeth took the lead 31 minutes in, when Liam Noble’s exquisite through ball found Williams leaving him to arrow his shot into the top corner, leaving Shildon stopped Shaun Newbrook no chance.

The visitors doubled their lead six minutes later, as Henderson’s goalbound header from a free kick crossed the line in the eye of the officials, despite protest from the Shildon players as they thought it hadn’t crossed the line.

Two minutes later Morpeth were three goals to the good, as Johnson’s 20 yard free kick found its way past Newbrook at his near post.

The home side were awarded a penalty late on, as Moore was brought down in the area by the Morpeth defender.

Craggs stepped up and sent the keeper the wrong way, placing his effort into the bottom left corner to pull a goal back for his side.

Craggs went close to adding his second in the 87th minute, however he sent his free kick just over the bar.

Shildon’s next game is away to Stockton Town in the FA Cup Extra Preliminary Round.