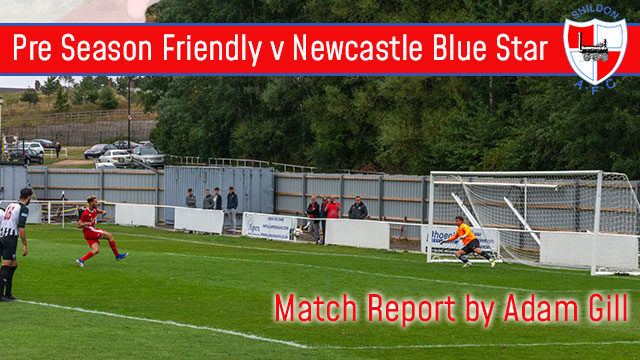 The Railwaymen continued their 100 percent pre-season record as they defeated Newcastle Blue Star at the Scotswood Sports Centre.

Ben Trotter gave the visitors the lead in the 54th minute before substitute Danny Craggs doubled his sides advantage.

Brandon Mallaburn added a third late on before Billy Greulich-Smith sealed the win with a penalty just before the final whistle.

Blue Star almost took the lead 18 minutes in, when a long ball over the top found Callum Johnston however he sent his strike just past the post.

Shildon almost went ahead in the 22nd minute, when Jordan Lavery cut inside, only to see his effort come back off the post.

Aidan Heywood almost gave Shildon the lead just before half-time, however his free kick went just over the bar.

The visitors took the lead when Trotter swept the ball home into the bottom corner after Greulich-Smith’s knock down.

Craggs doubled Shildon’s lead 18 minutes from time, after he got onto the end of Greulich-Smith’s pass before he arrowed his effort into the bottom corner.

Greulich-Smith completed his hat-trick of assists two minutes from time, as he laid off Mallaburn before he fired home.

Shildon were awarded a penalty late on when Craggs was brought down in the Blue Star penalty area, much to the disbelief of the home side.

Greulich-Smith stepped up and slotted home to cap off a convincing win.