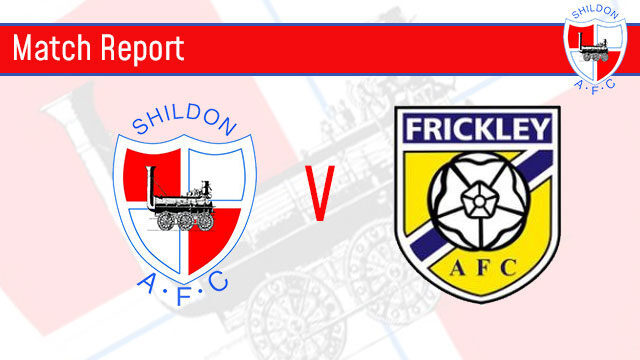 Shildon overcame Frickley Athletic in this fiery encounter as they maintained their excellent pre-season record at Dean Street.

Brad Grayson gave Frickley the lead in the 16th minute before Daniel Moore scored the equaliser on the half-hour mark.

Dean Thexton gave his side the lead four minutes later after some neat build up play from the Shildon attack.

The home side came into the game having won all four of their pre-season games, having seen off Sunderland West End, Silksworth CW, Newcastle Blue Star and Willington.

The Blues went ahead when Grayson brilliantly curled his 20 yard free kick into the top corner beyond Shildon keeper Shaun Newbrook.

The hosts almost pulled level eight minutes later when Moore got onto the end of Danny Craggs’ cross, however he directed his header onto the bar.

Moore did give Shildon the lead after Frickley keeper Alfie Eccles-Smith lost the ball, leaving Moore to nod home into an empty net.

The Railwaymen went ahead four minutes later, when Chay Liddle found Billy Greulich-Smith before the striker expertly flicked the ball beyond the Frickley defence into the path of Thexton who placed the ball beyond Eccles-Smith.

Frickley came close to drawing level on the hour mark, when Jack Wightwick’s cross found Grayson who could only head wide.

Wightwick was again at the centre of Frickley’s play, as his pull back found Keegan Everington on the edge of the box, however he sent his effort just wide.

The home side nearly increased their advantage 20 minutes from time when Craggs’ thunderous strike from the edge hit the bar, before Zak Atkinson headed the rebound over.

Atkinson went close again just a minute later as he found himself through on goal, however his lobbed effort came back off the bar into the hands of Eccles-Smith.

Shildon will complete pre-season fixtures at home to Northern Premier League Premier Division side Morpeth Town as they look to end with a perfect record.